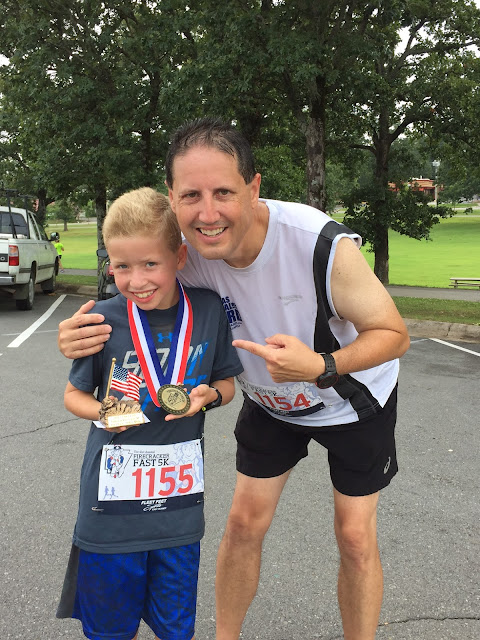 It has been a busy last few months with lots of races and I feel bad because I haven’t been keeping up with our racing blog like I should have been. With that being said, I’m going to briefly recap the many 5Ks and one 4-miler we’ve ran during the summer.


The one thing that has been a constant in Braden’s brief running life is the difficulty in dealing with hot weather and humidity. Even though this summer was extremely mild, compared to the normal melting temperatures we get here in Arkansas, Braden had a difficult time adapting. He was fortunate enough to win a lot of the races in his age group, but his times took a hit.


The first two races of the summer were the Firecracker Fast 5K and That Dam Night Run 5K. I had hoped Braden would do really well since both races were advertised as being mainly downhill and one of them being at nighttime, but the humidity got the best of him and I beat him in both events.


The race officials said the Firecracker was a great race to set a PR, but the heavy air would prevent any PRs being set by us. Braden started out pretty quick, but I was able to catch up and pass him at the midpoint water stop. I kept on increasing the distance between us and I was exhausted with a half mile to go, so I actually stopped to see where Braden was. Several seconds later, I saw him rounding a bend and I headed to the finish line falling short of my PR by 30 seconds with a time of 22:35, while Braden came in with a time of 23:04 (7:25 pace). This race would be his best of the summer as he came in first amongst 48 others in his age group and he won a $20 gift card to Fleet Feet. 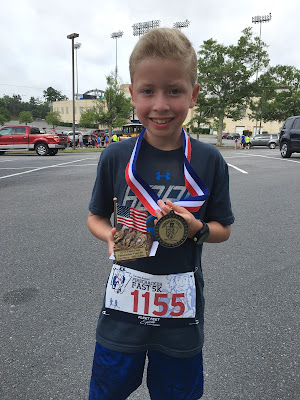 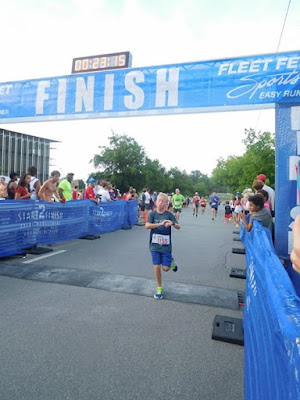 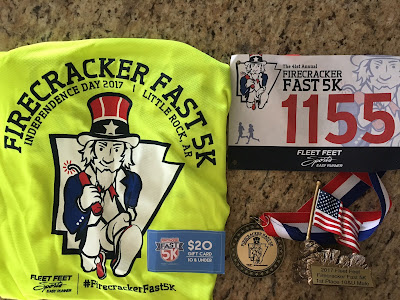 In the That Dam Night Run 5K the weather at night was beautiful for the downhill race. Despite the comfortable 82-degree temperature Braden really struggled as I passed him after the first mile. He said that after I passed him, he began to walk and when I crossed the finish line, it seemed like an eternity for him to come in. I finished with a time of 22:49, while Braden finished at 24:37 (7:56 pace) and despite the bad race, he placed third in his age group. 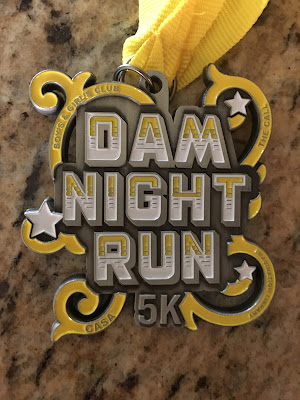 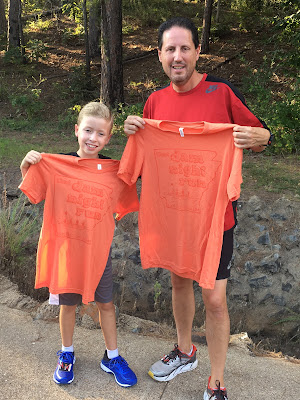 Our next race was the Grand Prix’s White River 4 Mile Classic in Batesville. This race is traditionally very hot, since it is during the beginning of August, but this year, the temperatures were very mild and ideal. What makes this race difficult, other than the normal high heat, is the many hills throughout the course. Braden took off at a pretty good pace and I stayed within striking distance for most of the race. I figured the hills would get to him because he hadn’t been performing good during our training runs, but he was tackling them very well. At about the three-mile mark I passed him, but he quickly rebounded and passed me back, and from there, pushed to the finish. He came across the finish line with a time of 30:57 (7:44 pace) and I came in 14 seconds later, breaking the streak of getting beat by me the previous two races. Braden finished first in his age group and I actually finished fourth in my age group. 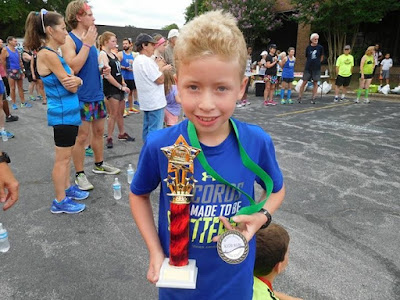 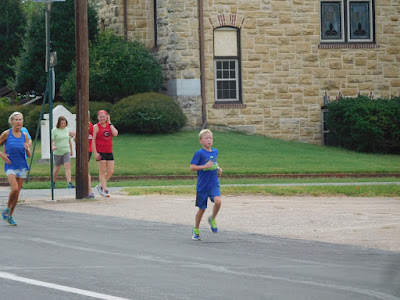 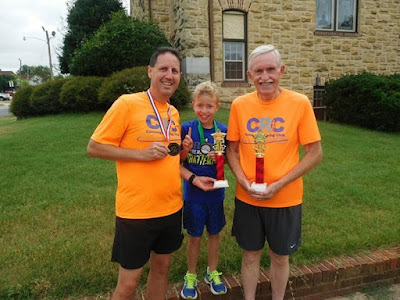 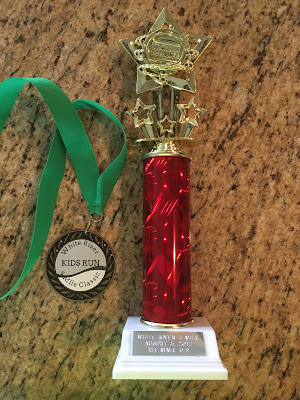 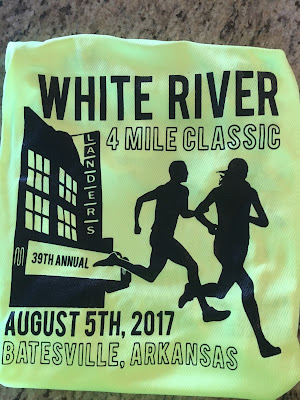 The following race ended up being Braden’s worst (time-wise) of the summer in the Grand Prix's Watermelon 5K at Hope. Once again, this is traditionally a tough race for Braden because of the heat and the long drive to the race. Even though he didn’t walk at any point of the race, he said he legs felt heavy in the heat and he couldn’t maintain a good pace. He finished with a time of 24:52 (8:01 pace), and came in second in his age group. 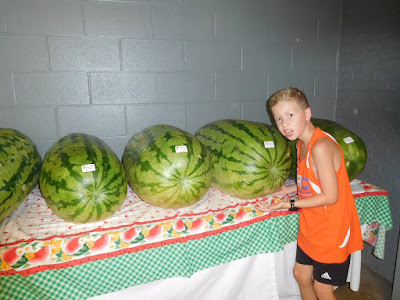 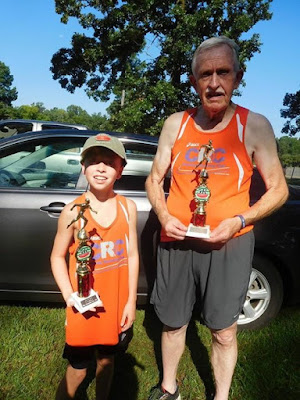 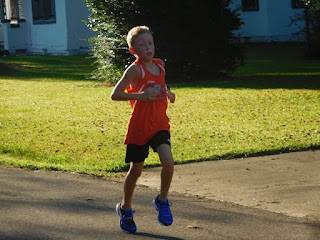 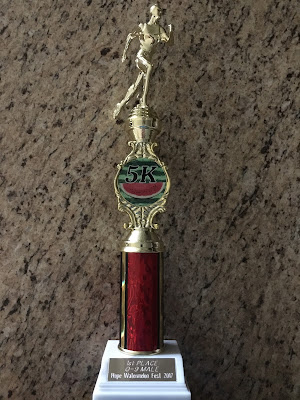 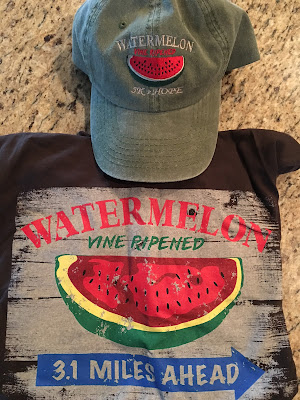 After a three-week break in our race schedule, we hit the pavement again in the Grand Prix's ARK 5K Classic in Little Rock. Prior to the race, Braden had a tough time during our training runs and he didn’t feel like he would do well at the race. The weather was nice and foggy before the start, but then the humidity kicked in. From the start, I was ahead of Braden for the whole race until the last quarter mile. From there, the humidity finally got to me and he passed me up as he sprinted to the line. He finished with an improved time of 23:47 and I came in 8 seconds after him. His time was good enough to win first in his age group and most importantly he gained the necessary points to clinch the Grand Prix Championship in his age group for the third consecutive year! 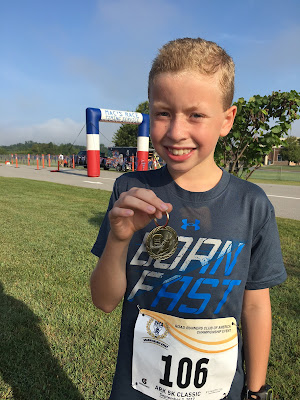 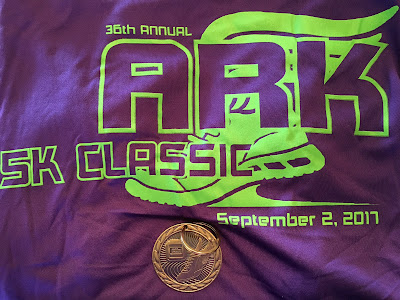 Our most recent race was the Grand Prix’s Minuteman Cross Country 5K in Little Rock. This was my first time ever running a race on the grass, but it was Braden’s fifth, so he had an edge on me running on that type of course. Unlike our recent races, he took off from the start and I could not hang with him as he opened up a lengthy gap between us. I tried my best to get some good momentum, but the thick grass and uneven surface got to me. This time Braden got to wait on me for what seemed an eternity as he finished with a time of 23:38 (7:37 pace) and I trailed behind him by 1:17. Once again, he finished first in his age group and more markedly, he finished about 3 ½ minutes better than the previous year on the same course. 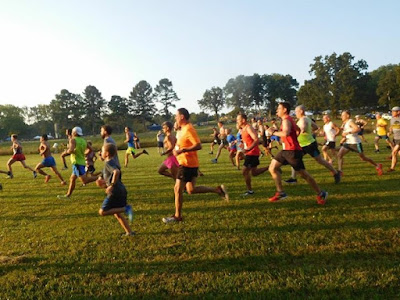 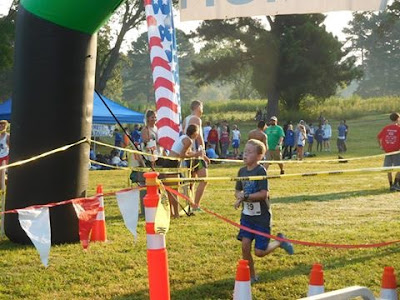 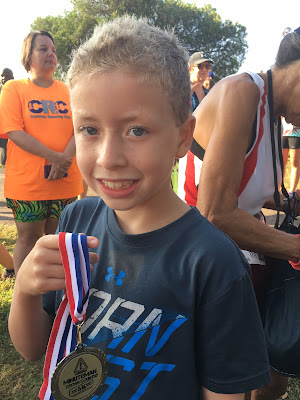 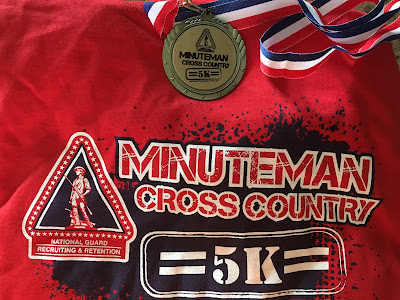 As the temperatures continue to drop, I know Braden will get back to his normal faster times, but we’ve got to try to figure out a way to not getting him to swing dramatically to the other direction when it starts heating up again. Heat and humidity is truly his Achilles heel. We grade his performance using the age-graded calculators where anything above 70% is great; but all of his most recent races have been in the 60’s -- except the Firecracker 5K. In dealing with his struggles in the summer, one of the things we’ve been discussing and preparing him for is his age group finishes. He knows now that, unless he has a REALLY bad race, he will most likely place at or near the top of his age group, but next year when he hits the age of 10, he’ll be running into steeper competition against a lot older kids around junior high age. There have been times when he doesn’t place and he gets down on himself, so it will be interesting to see how he reacts and perseveres when he doesn’t come close to finishing at the top of the standings as often as he does now.


Going forward, there are just a few more 5Ks on the schedule with a couple of 10Ks and Half Marathons thrown in the mix. We are going to be ramping up our mileage in preparation for the Soaring Wings Half Marathon and then we’ll see if we can get his times down for a record breaking attempt at the CASA Half Marathon in December. Braden and Bernie have won their respective age groups, so their Grand Prix points won’t count anymore, while I three more races to accumulate points.