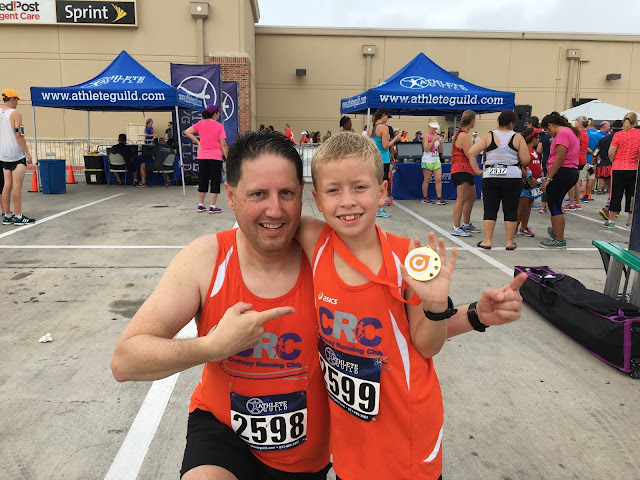 It's great when wishful plans comes together and this was the case with a last minute race Braden and I entered at the Orange Leaf 5K in New Braunfels, TX on July 16.

Originally, my last race with Braden was going to be the Rock Run 8K back in May due to my deployment. I figured after that race, and my subsequent departure to Fort Hood, TX, it would be my last opportunity to see the family, much less race with Braden. Fortunately, we received a four-day pass that worked perfectly within a tight window of me leaving and Braden leaving to Sacramento, CA for USATF Junior Olympics.

When I was able to lock down on my pass window, I started to plan out a trip to San Antonio. I knew we would go to SeaWorld and the Alamo, but other than that I really wanted to take it easy and enjoy time with the family. I hadn't planned on any kind of running events...that is until a phone conversation I had with Braden. He asked if we could run a race, so I looked for anything in San Antonio and all I could find was a women's 5K. With the possibility of us striking out, he said we should just organize our own 5K race and invite others to run in our race! I laughed and told him it takes a little more organization for a race than what he was asking for. I wasn't about to give up though, so I expanded my search a little further out and found the Orange Leaf 5K about 30 minutes where we would be staying and signed us up. Needless to say, we were excited about the prospect of being able to run together again!

It was the day before the race when they picked me up to head to San Antonio. When we got there we relaxed a little, went swimming, saw some sights and before we knew it was 9:30 p.m. and we needed to eat dinner. We had already had pasta for lunch and I was wanting some good Tex-Mex food, so we went to the River Walk for dinner and it turned out to be a big mistake. The food was great, but the ensuing heartburn I received the next morning was not good! 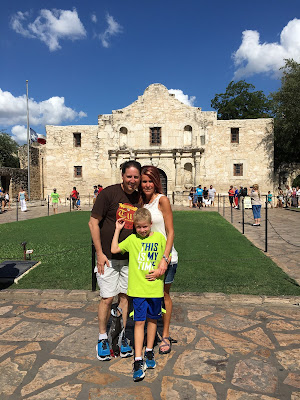 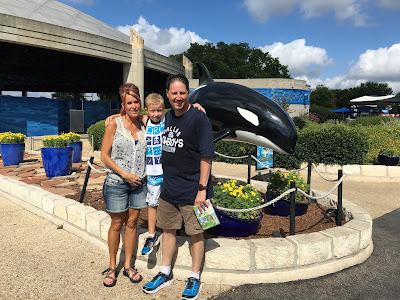 I had to get us up at 5 a.m. for the drive and 7 a.m. start, so it was going to be a short night of rest. After receiving about 4 hours of sleep it was really hard getting up and my heartburn was raging, but we got gathered up to head to New Braunfels. Thankfully, it was overcast and in the high 80's at the start of the race, but it was still very humid and I knew with the tiredness and heartburn I wasn't going to be able to hang with Braden at all during the race.


The flat course started at the Orange Leaf frozen yogurt shop and ran out and back through a shopping area and a country road that was adjacent. It was a weird kind of race since it combined a 5K and a Half Marathon, which started 30 minutes prior to our event.

We set some very basic race goals...my goal was just to survive and I told Braden to just go out and have fun, try to place, and wait for me at the finish line. Normally, he is in the 0-9 age group, but for this particular race his age group was 0-14, which put him against older kids who would have a substantial edge over him.

Braden started really well and before I knew it, he was already way ahead of me. He finished his first mile at a 7:40 pace and I didn't have any visual of him going into the second mile. As I neared the turnaround point, we passed each other and it looked like he was holding his own against the other kids, but it was hard seeing if some of the teenagers were below or above 14. He slowed up on the second mile as his pace came in at 8:28. I was suffering through my own bad race with my tired legs and flaming stomach and it was all I could do just to not stop and throw-up, but I trudged along towards the finish where Braden was waiting and encouraging me to finish strong. I finished with a bad, for me, time of 27:55 and Braden told me his time was 24:59, finishing his last 1.1 miles at an 8:19 pace. He was happy because he kicked my rear end and I was happy because he was able to finish in the top 3 in his age group finishing behind a 13 and 14-year-old! 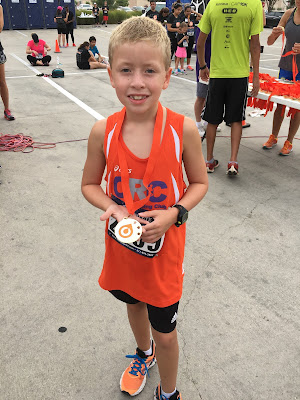 After the race, Orange Leaf had free frozen yogurt to cool off my melting body and we headed back to the hotel where I took a much needed nap! We had a lot of fun the rest of our time in San Antonio. Even though the days spent were long, it seemed our cumulative time spent together flew by too fast! I was just happy that we were able to spend any time together since a few months earlier I didn't think I would have the opportunity to be with them. 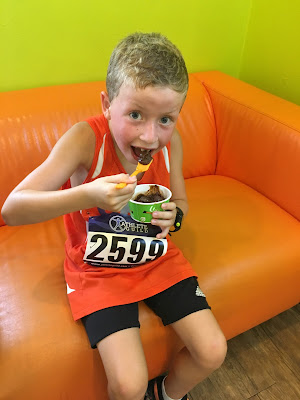 As we said our goodbyes, I told Braden to keep running strong and I promised him I would get in better shape so when I get back I'll be able to hang with him better!

Braden's next big event is the Javelin competition at Junior Olympic Nationals. Even though he doesn't really have a realistic shot of placing, I'm just hoping he could break a personal best and have a good time. His next road race will be in a couple of weeks as the Grand Prix starts up again with a hot, hilly, and humid run at the White River 4 miler in Batesville. He hasn't ran this race before, but he is feeling confident because he's ran in the heat all summer long. 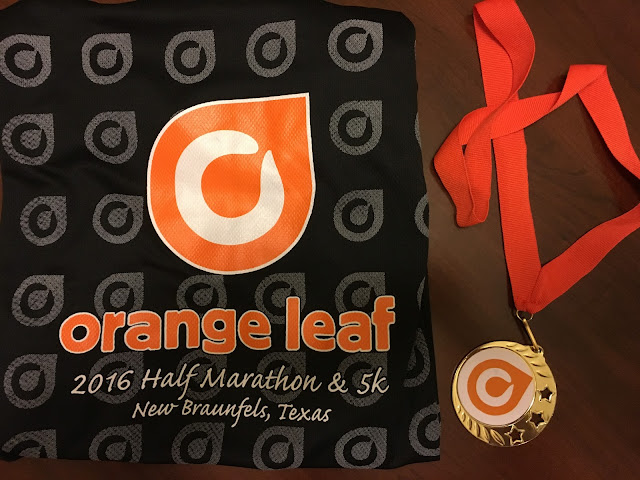 Posted by Running Down a Dream at 1:56 PM