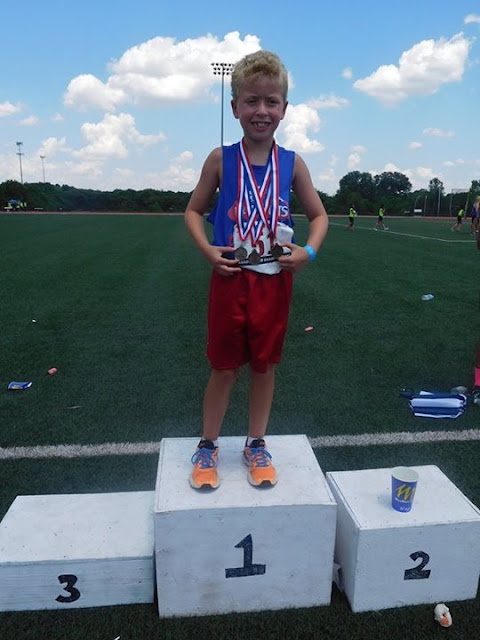 One week after the Arkansas 2 Mile run, Braden was back at it again for the shortest Grand Prix race of the year…the Go! Mile one-mile run in Little Rock. 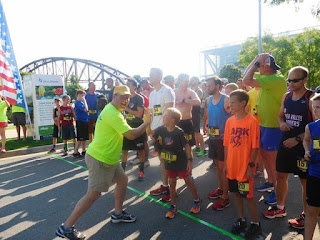 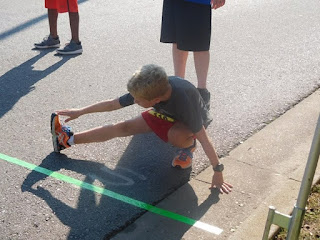 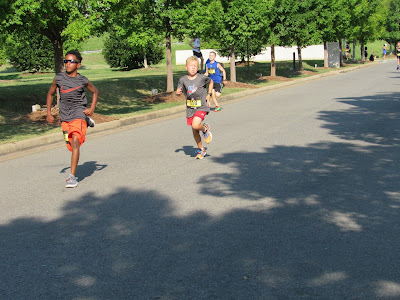 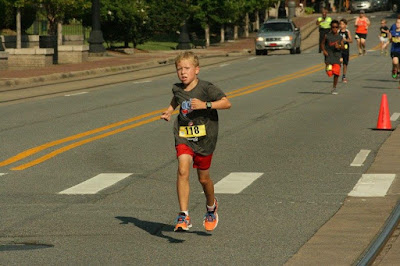 Braden came in second place last year with a time of 7:30 and he was looking to be around the 7:00 mark this time around.  He felt confident, but once again, his speed just wasn’t there. He said he felt decent, but the little hill towards the end kinda got him as he finished in second place with a time of 7:22 (losing first by 7 seconds). He set a new PR, it was quite a bit off from the time he was wanting and once again he was apathetic towards the result.

Even though he came in second, he came in first amongst the Grand Prix runners, received all 30 points, and now has 230 points for the year. He now is only one non-championship race away from clinching first place overall for his age group for the year, with seven races remaining!

The really cool thing is that he is seven races away from also becoming an Iron Runner and completing all the races for his age group! I don't foresee anything that will keep from reaching the Iron Runner goal, other than a possible conflict with the last race of the year with a USATF Cross Country qualifying race. I may have to try to work a deal out with USATF Arkansas for a bye to Nationals, if that is all Braden is needing to pull off the tough accomplishment. 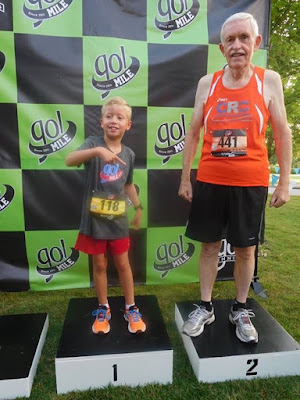 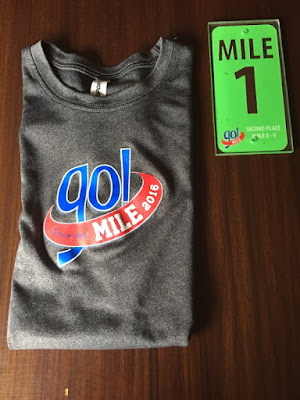 The next week he had the Arkansas USATF Championships in Little Rock to qualify for Regionals in Joplin, MO. It was basically the first step to go to Nationals in Sacramento, CA late July.


Braden has had a difficult time this summer improving upon the performances he had a year earlier and it really came to a breaking point with him over the past couple of months. Like I mentioned in the previous blog, he ran slower than expected at his track meet. While most of the kid’s he keeps up with regionally have improved greatly since last year, Braden’s times have gotten worse. One night after track practice, I received a call from my frustrated little runner about his times and why was he running so much slower than the previous year. The only thing I could figure was that the heat was really getting to him, but I was also thinking it had to be something else because it was just as hot the previous year and he didn’t have any issues.


At the USATF meet, he was slotted to throw the javelin and run in the 800M and 1500M. Apparently it was terribly hot and windy and it was reflected in his results.


His first race out the gate was the 800M and he took first place with a time of 3:16.72, which was an improvement from the previous week, but still off from his PB the previous year. 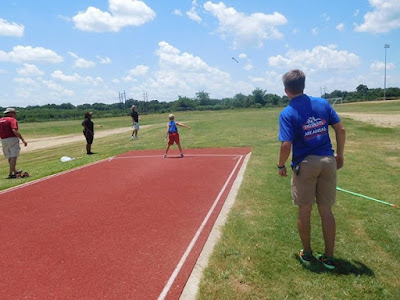 He then was ready for the javelin, and even though he didn’t throw it as far the previous week, he still came in first with a throw of 42-25 ft. in the windy conditions. Of course it probably didn't help that he got stung by a yellow jacket on his throwing arm, prior to the event...ouch! 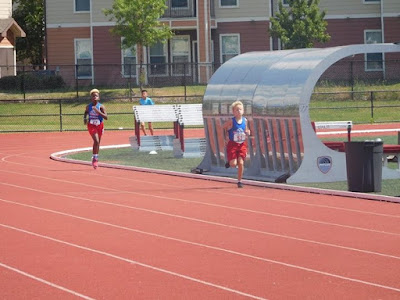 His last event was the 1500M and he did well against his competition finishing in first, but the downside was his time of 6:58.88, which was worse than the previous week and not even close to his times from last year (6:31).

He took home three gold medals from the meet, but he knew his competition at the next level was going to be tougher and he was constantly getting frustrated with his times. 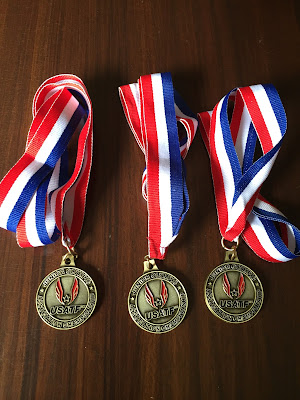 The USATF Region 9 Championships in Joplin came two weeks later on July 9-10 and the competition did indeed prove to be tougher.


The schedule looked favorable as he had his first race at 5 p.m. on Saturday, then he would run the 1500M on Sunday morning at 8 a.m. followed shortly thereafter with the javelin. Braden’s papa and nana Larson left early on Saturday to get to Joplin and received a call telling them that his 800M race got moved up to 3 p.m., so luckily they had left early enough to where it wasn’t an issue. 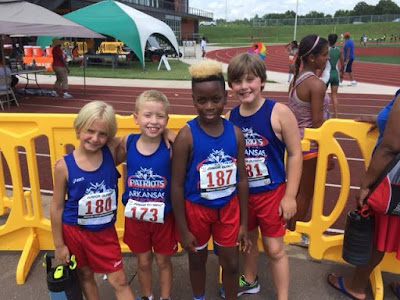 Braden was up against 11 other runners and he took 8th place overall with a time of 3:15.80, which was his best time this season, but he didn’t qualify for Nationals because he had to finish in the top 5. 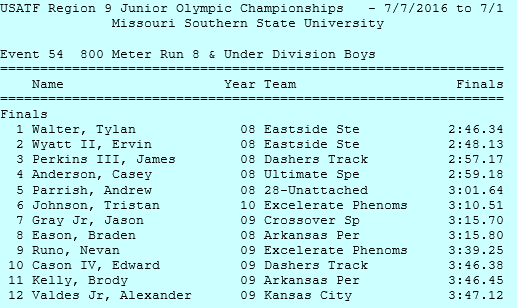 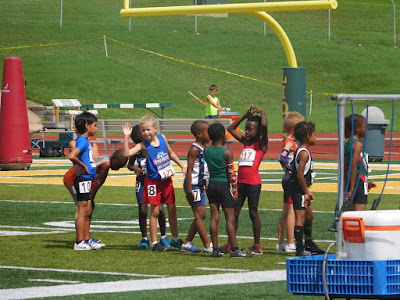 I tried to encourage him for his race the following morning but he was feeling bad and not very confident. He actually said that he didn’t want to mess up by not qualifying and wasting the money we had already spent on plane tickets to Sacramento. I felt bad for him feeling the way he was, but I felt like he would be able to step up and qualify in the 1500M, since that was the race he qualified at last year after coming in 6th in the 800M and not qualifying. 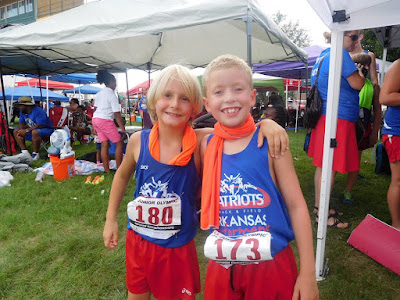 Sunday came and surprisingly he was running with seven other kids in his age group, which was by far the most he’s ran against in competition. Even though it was hot, it wasn’t nearly as bad as it had been due to the early start. Braden did a lot better than his previous meets with a time of 6:33, but it was still not as good as last year, as he came in 6th place and missed qualifying by 27 seconds. The kid who beat him by about 30 seconds last year, beat Braden by almost a minute this year. Braden’s coach even said he just doesn’t have the kick and drive like he did last year and can’t figure out what’s going on. He even thought that maybe me being gone and away from him is mentally messing with Braden's performance. 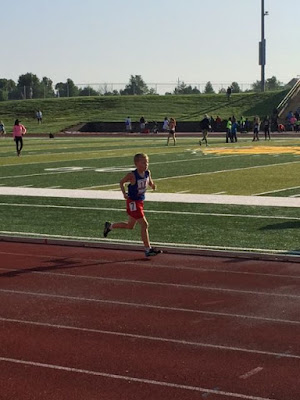 Braden’s last shot at making Nationals took place immediately after the run as he headed to the javelin area. I was fortunate enough to get the play-by-play of his throws on the phone, but he was struggling to throw it as well as he had at previous meets, with his first five throws coming in just under 40 ft. In his last attempt he had his best throw of 41-01 which was good enough for 4th place and was enough to qualify him for Nationals! 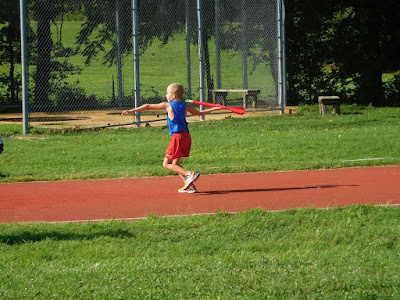 It's really weird that Braden is going to Nationals, but not in the capacity he’s wanting to go. I know he was wanting to be able to run, and seeing all the other runners out there participating while he is watching is going to tough for him, but at least he'll be able to participate in the javelin competition.

I'm really excited about the next blog entry because it will be a special one with Braden’s next road race…stay tuned!

Posted by Running Down a Dream at 8:40 PM