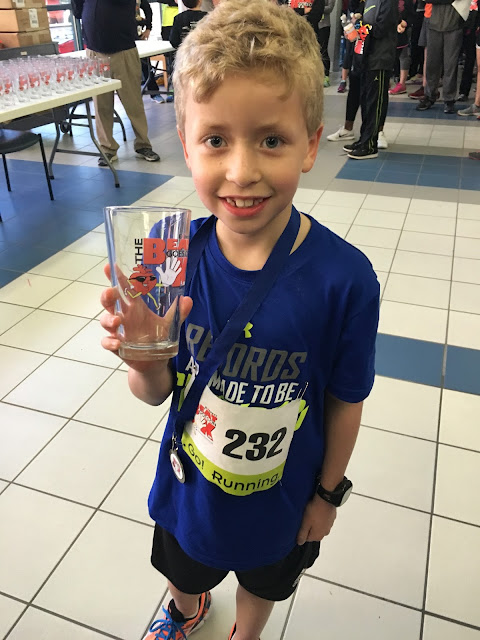 I thought our next race after the Valentine's Day 5K would be the Little Rock Marathon 10K, but with a break in our schedule, there was an opportunity to get in another 5K event. With the weather outlook looking good, I decided to sign us up for The Beat Goes On 5K in Benton.

Braden was wanting to improve on his Valentine's Day 5K race and the conditions were looking very good for him to do that. What I wasn't expecting was the hillier terrain would we have to navigate. The February temperatures were very nice, and by race time, it was in the high 40's with 5 mph winds. From the start line we saw there was an immediate hill we had to run up. One of our fellow Grand Prix runners said he had run the course before and mentioned the biggest hills were at the start and the finish, but for the most part the course had rolling hills. 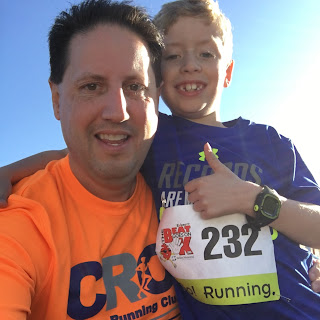 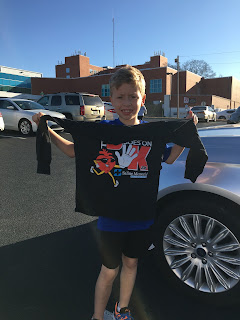 We positioned ourselves toward the front and Braden said he would attack the first hill since we thought the course would "even" out afterwards. When the race started, we got up the hill, but didn't realize there was another hill right ahead. I was a little bit ahead of Braden, but it didn't take long before he caught up with me. We were going at a pretty brisk pace and I was already regretting attacking the first hills as my pace started to slow up at the end of the first mile. Our time after the first mile was at 7:22 and at that point I told Braden to go for it since I knew I was going to slow my pace.

We had a few rolling elevations on the second mile as Braden opened up a little bit of a lead on me. I could tell the hills were taking a toll on him as well as I started to close the gap a few times. I told him at the beginning of the race that he should beat me and as I was getting closer to him at the end of the second mile, I shouted that I was right behind and he better not let me catch him. He finished the second mile with a total time of 15:21 (5 seconds ahead of me) and ran it at a 7:59 minute per mile pace.

During the third mile, we both slowed up around the 2.5 mile mark, except I was slower than Braden. We were both getting tired, but I was encouraging him to push on as the distance between us increased. With a little more than a quarter of a mile to go the music was blaring. In my last blog, I mentioned how much Braden loved music from the Rocky soundtrack, so what do you think was playing? Gonna Fly Now...his favorite running song. I was laughing to myself because I knew he would turn on the jets once he started to hear the music. Even with a final uphill climb to the finish line, Braden came in strong with a time of 24:10. His third mile pace was 7:52 and the last .10 at a 7:16 pace, with a total average pace of 7:43.

Even though Braden initially was shooting to finish with a better time, we both knew his finishing time was pretty decent because the course was one of the tougher ones we had raced at the 5K distance. It was his third best 5K race and his age-graded percentage was a very good 75.65%. Overall, Braden finished 1st out of 9 boys in his age group, 41st out of 184 male runners, and 49th out of 457 total participants. I finished 34 seconds behind Braden, but what frustrated me was the fact that I got passed up in the last tenth of a mile to finish fourth in my age group.

At the awards ceremony, Braden received some very nice compliments for his run, but the biggest highlight for him was being able to talk with Leah Thorvilson. Leah has won multiple Little Rock Marathons and is also a five-time Grand Prix champion as well. He enjoyed talking running and the Grand Prix with Leah and she was very gracious in her time spent with him.

Our next race is the big one...the Little Rock Marathon weekend. Braden and I will run the 10K on Saturday and then I will turn around and run the Half Marathon the next day. I plan to run hard and will try to keep up with Braden the best I can during the 10K and will most likely not push myself too much in running the Half. 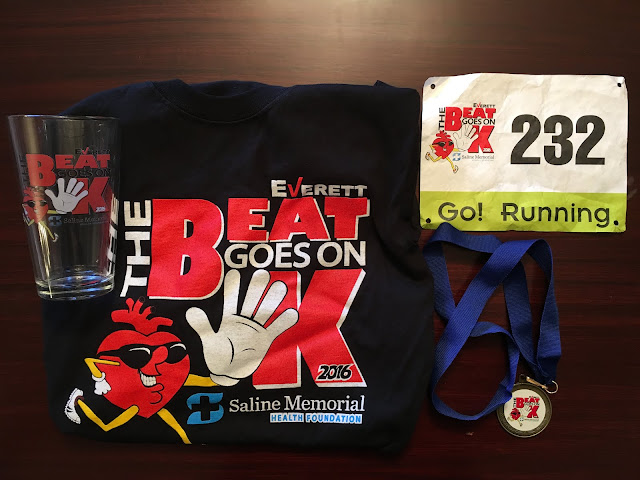