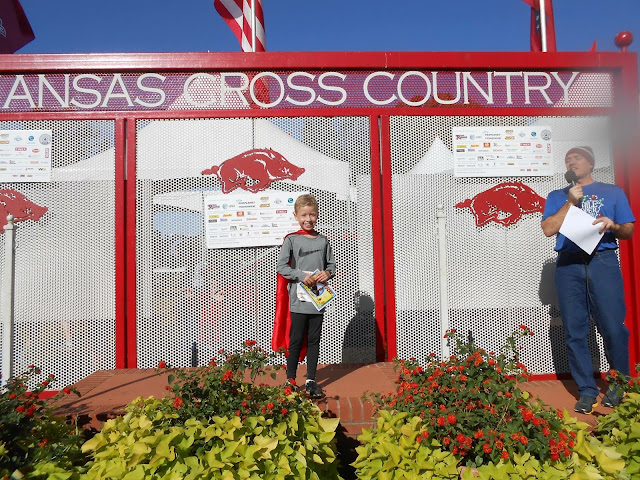 to for a great while. Not only was it his first cross country race, but it was an Arkansas Grand Prix Championship race that, if he won, would enable him to come in first overall in his age group for the Grand Prix season.

The Chile Pepper race is quite an experience. It is held at the cross country course for the University of Arkansas and it is an all day event. Not only was there an open 10K and 5K race for runners such as Braden, but there were also collegiate, high school, and junior high races as well. Even though a lot of the runners were from Arkansas, there were a bunch from Texas and Oklahoma high schools as well as many major college teams from the South and Midwest.

Since this was a cross country race, Braden was excited to use the spikes he runs with in track and field. His normal track spikes are 1/4" and I had to replace those with 3/8" spikes for the grass terrain. Though Braden had been posting some solid training runs prior to the race, I knew that it would prove more challenging for him to run on grass instead of a road surface.

At our race in Dallas the week prior the temperature was a little too warm for our 10K race, so at Fayetteville Braden got treated to temperatures in the mid-40's. I packed warm and cold weather clothes for him and told him that he would have to use his best judgement on what to wear because I didn't want him to worry about getting too hot or cold during the race. Since I wasn't able to go with Braden to Fayetteville, his papa Bernie handled the running logistics with him. 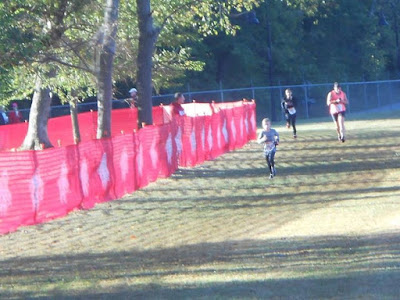 Braden basically had to run 2.5 loops and he said that there was a tough little hill that he had to negotiate three times. By and large he said that he didn't like the course because it was hilly and had potholes, but I said he needs to get used to terrains like the one he ran because that is the way cross country courses are designed and some provide even more challenges than the one he ran on. I also told him that prior to the race to wear his headband to keep his ears warm and to take it off right before the start because I knew he would not want to wear it through the whole race. Well, he didn't heed my advice and after the first mile he had to take off the headband because it was too warm for his ears and he had to tote it for another couple of miles.

I can't give any splits on Braden's times because he deleted them on his running watch. His reasoning was that he thought he had run the race in 58 minutes and he didn't want to save the time, so I had to tell him that in the future not to do that since it helps me keep record on his performance. He did say that he tried to keep a steady pace, but had to slow down during the middle portion of the race.
Braden said at the end of the race he kicked it in after the last bend and he finished with an official time of 56:09. His time was a little bit slower than what he had been running, but it was definitely understandable due to it being a new surface he had never run on before.﻿ 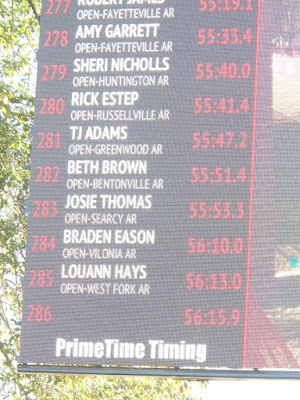 During the awards ceremony, the race director told Braden that when you look in the dictionary for the word stud, you'll see Braden! Braden was the only runner in his age group and won by default, but what made it really cool was that he was the youngest runner to ever finish the Chile Pepper 10K in its history. Even at the packet pick-up they couldn't find his stuff because they were looking in the 5K packets until he told them that he was running the 10K. 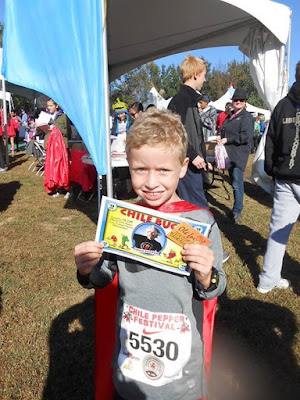 Braden received a Super Fast Pepper cape as his first place reward along with $15 in ChileBucks to spend at the festival. He bought himself a t-shirt from the race and also a bottle of hot sauce for his mom and dad (we collect hot sauce bottles!). What was really unselfish and kind was when he used $5 of his ChileBucks to buy sunglasses for another fellow runner from the Cabot Cruisers running club who didn't win anything because she didn't place in the top five. Braden and her have gotten to know each other through the Grand Prix and other local races and he felt like she should have received something. It warms my heart when he shows random acts of kindness towards other people! 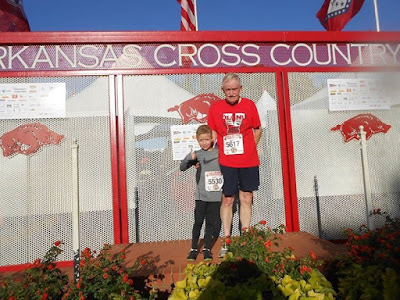 Because this was a Grand Prix Championship race, Braden collected the full 30 points that he needed to reach 250 points and clinched first place for his age group in the standings! Since the Grand Prix is setup to tally best point totals from five championship and non-championship races, he cannot get anymore points for the rest of the season.

Ever since he joined the Grand Prix in March, he had a goal to win his age group and he put forth a lot of hard work and effort to reach that goal. We have made a lot of friends with the Conway Running Club and runners from the other clubs...we probably wouldn't have done it without the Grand Prix series. I have looked at other states to see if they had something similar to our Grand Prix and I believe the Arkansas RRCA's setup is one, if not the best, in the country. ﻿
﻿

Overall, this race provided a valuable training opportunity for Braden because in November he'll be running a 2K cross country race in Little Rock to qualify for the Junior Olympic National XC Championship in Albuquerque, New Mexico in December. Until then we have a few more 5K and 10K races including his final Grand Prix race in a couple of weeks in Fort Smith...the Survivor's Challenge 10K. 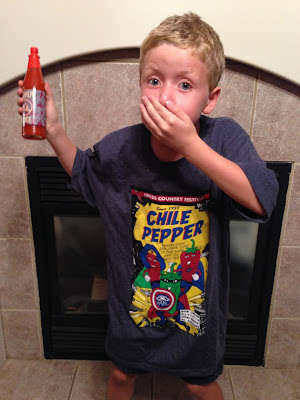 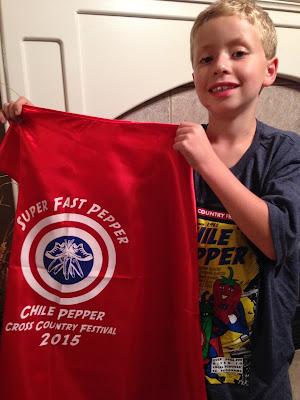 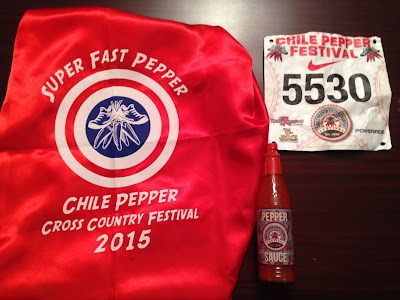 Posted by Running Down a Dream at 5:12 PM