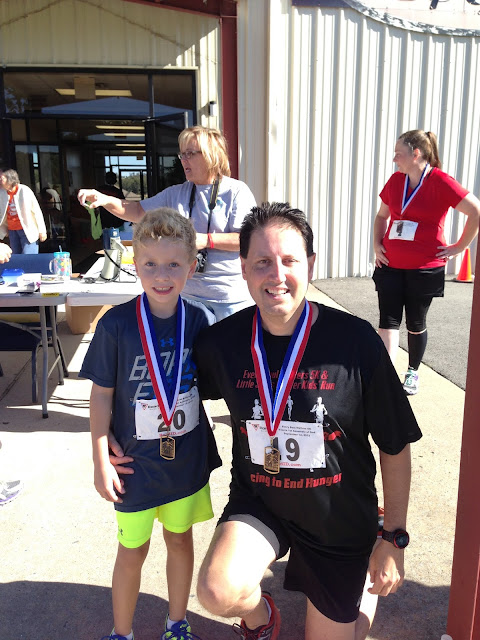 For the first time, in what seemed like forever, the weather was absolutely spectacular for the Every Soul Matters 5K hosted by our church in our hometown of Vilonia. We had been anticipating the hot and humid temperatures that we've had to finally break and what we got was the low 60's for the start of the race which should have made for faster times and hopefully another PR for Braden. He was excited after his last race to set another PR because he had run so well when the temperatures were hotter, so he naturally thought when it got cooler it would translate to even faster run times...unfortunately, he discovered that bad training can lead to slower times.

With our hot summers here in Arkansas, there are not as many races that run beyond 5Ks, so because of this, his last race beyond 5K was the Yorktown Independence 8K on July 4 and his last 10K race was in May at the Toad Suck Daze 10K. I've been trying to get him ramped up in his mileage to the 6.2 mile level again because he's got a full docket of those types of races rapidly coming up and I don't want him to be unprepared. For the past couple of weeks I've tried to get at least one 10K practice run out of him, but he hasn't even come close to getting there. The week prior to the Every Soul Matters race we tried for three days to get a good training run, but all I could get was one one-mile and two two-mile runs out of him before he would "give out." After some long conversations with him about my concerns, it basically boiled down to the issue of him being bored with the same route we always take, running by ourselves, and lastly thinking that he's doing just fine training the way he is because he's still setting PRs. I had to tell him that running is a "lonely" sport most of the time and that we just can't travel all over the place for changes in scenery during training. The thing that bothered me the most, though, was him thinking he could just go out and run races without doing the yeoman's work to improve his times. With all this being said, I still thought that he could break his PR because he has proven me wrong before when I thought he wouldn't do that well.

Prior to the start, we talked about our pace and the finishing time he wanted and so we looked at going at a 7:55 pace which would have brought him in around 24:32.

I took us out at the pace we were gunning for, but after the first mile I looked back and saw that Braden was a little bit behind me. My first inclination was to slow down and let him catch up to me, but then I started to think that I needed to go ahead and run my own race and show him that the old man was better than he thought and that his training was going to reflect in his result. After the first mile my pace was at 7:55 and his was 8:04. 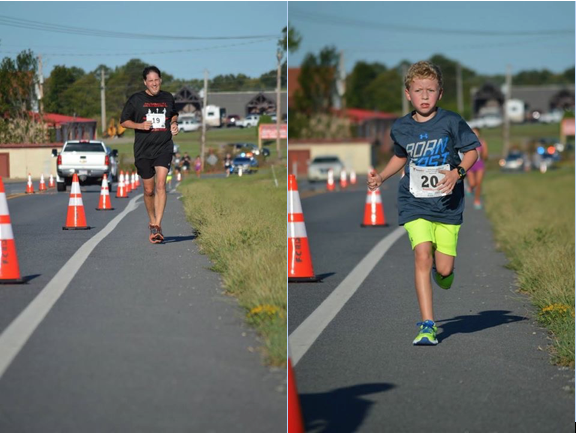 During the second mile, confusing came into play.

Last year, there were some front runners who didn't turn down the correct street and cut the course short by .15 miles. This year, the course was reversed, but the same thing happened again with the confusion. The 2 mile water stop was located at the corner of a street, but we were supposed to go to the next street up to turn. I had already noticed the runners ahead of me who turned down the wrong street, so I asked if this was a mistake or not and was told to follow the ones who turned down the wrong street. I knew this was not correct, but I thought maybe something could have changed, so I followed the group in front of me. I finished the second mile at an 8:17 pace and Braden was an 8:49 because he had to stop for a little bit.

I know you can't set a PR every race, but Braden knew that his time should have been a lot better, especially with the cooler temps that we had. I also told him that because of my improved training, I'm getting faster and he'll need to start taking his training more seriously if he wants to beat me in the future.

Overall, we did have a fun time and not only did Braden come in first place in his age group, but I, along with his grandparents, came in first in our respective age groups as well. Braden, who never turns down an opportunity to race, had enough energy at the end of the 5K to run with some of the other kids during their Little Souls Matter races around the church. 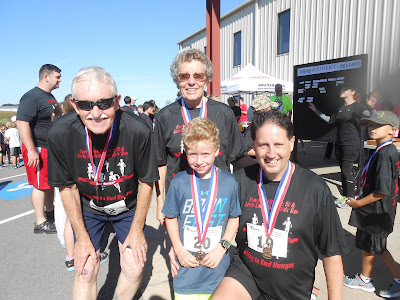 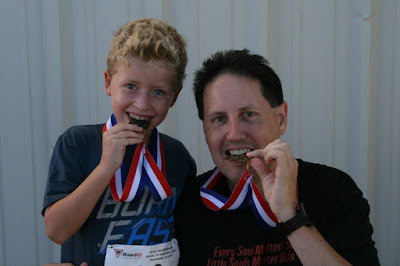 Most of our upcoming races will be of the 10K variety and I'm thankful that we won't be messing with the heat anymore on our runs. Even though I know it's hard to stay motivated all the time, I'm sure that Braden will step up to the plate and keep improving...he's just too competitive not to. 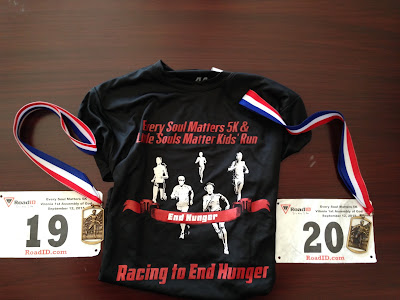 Posted by Running Down a Dream at 5:52 PM