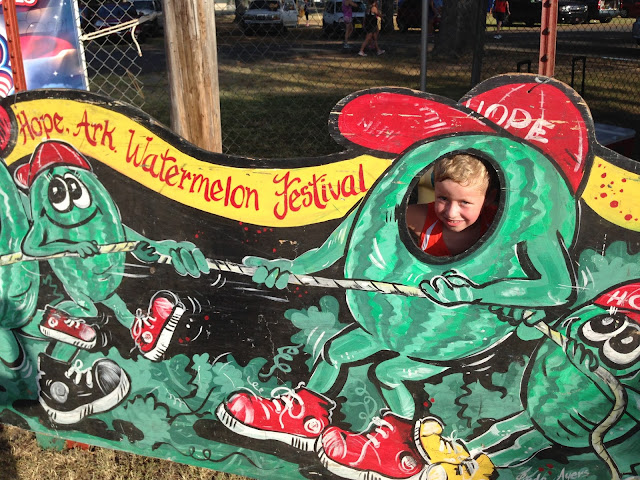 It was hot, hoT, hOT, HOT!!! at the Watermelon 5K in Hope, AR on August 8th, and it turned out to be a great race for Braden and a not so good one for me.

Let me be the first to mention that it is not the norm for us to run in a 5K race that is 2 1/2 hours away from our home. Because it was a Grand Prix event and Braden had missed the White River 4 Miler the previous week when he was vacationing in Minnesota, I figured it would be good to get back in the “Grand Prix rhythm” again.  The good thing about his trip was that he was able to have a few good training runs because the weather was a lot cooler in Minnesota than the molten lava conditions we’ve had here in Arkansas.

The night before the race, we tried to get to bed early since we had to get up at 3:30 in the morning in preparation for the drive ahead. Braden got to sleep easily, but I couldn’t sleep worth a lick as I finally went down at midnight. Getting 3 1/2 hours of sleep and having to drive another 2 1/2 hours did not bode well for me as I would find out later on.

When we got to Hope, with my father-in-law Bernie in tow, the weather seemed rather pleasant, but that was before the sun came out. The temperatures were in the low 80’s and I was wishing the race could’ve begun earlier than the 7:30 a.m. start time. All I know was that we were trying our best to keep hydrated. 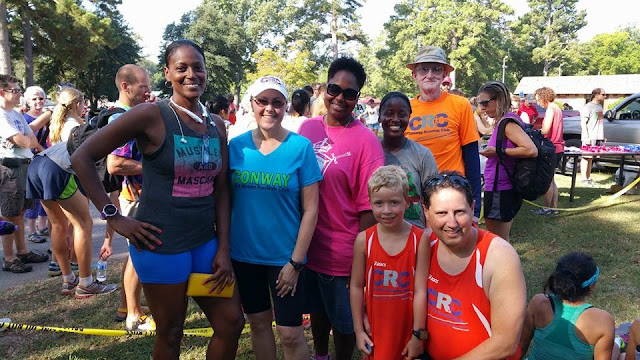 I always talk with Braden about goals for him before every race, and it may involve trying to get a new PR, getting maximum points if it's a Grand Prix race, or placing in his age group.

We set a goal to finish at an 8:15 pace (25:34), which would’ve set a PR for Braden and I told him that he would be running against a lot of other kids in his age group, so he would have a pretty good challenge.

We got off to a good start and didn’t have to worry about being near the front since it was a chipped time start (which I love…I HATE gun starts!). It didn’t take long for the sun to come bursting through and after the first mile I knew that I was going to be in trouble even though it was not a hilly course.

Braden had never beaten me legitimately in a race because I normally will have to coach him along and will have to slow the pace up a little so we can run together. This time, things would be different. At the first mile water stop we were at an 8:15 pace, but I felt tired and it seemed like I was running on sand. At that point I told him that I didn’t want to slow him up and if he felt o.k. he should just go on without me. He didn’t hesitate to leave the old man behind! As I was watching him from a distance, he was passing people right and left and my view of him got smaller and smaller.

My splits got progressively worse and I didn’t have any push whatsoever for the finish. When I finally got to the finish line at 27:16 my little man was there waiting on me. I asked him what his time was and he said it was 26 minutes, but I knew that we started a little behind, so his chip time was probably better. I asked him how he felt and he said he was great, despite throwing up after crossing the finish line (which is documented on the video of his finish down further in the blog). I think he just pushes himself so hard he just can’t hold anything in his stomach!

When I went to go see how he finished, I had to tell him that there was good news and bad news. The good news was that he had set a new PR with a time of 25:52, that shaved 43 seconds off his previous best and he also finished first amongst the Grand Prix runners. The bad news was that, despite setting a new PR, he actually finished in 4th place in his age group. He couldn’t believe it! He thought he had passed all the kids in his age group, but the thing was that the ones who finished ahead of him ran extremely fast (must be the water in southwest Arkansas!).

Braden's splits were the following:

This was only the second time (the first was his very first race) where he finished a race
and  he didn’t get an award. Because it was a non-championship race in the Grand Prix, awards are giving to the top three runners in each age group compared to the top five if it was a championship race. Even though he was little disappointed in not getting an award, he still felt proud about getting a PR on the hottest race day we’ll experience this year and he was sticking it to me after beating me by 1 1/2  minutes. We didn't go empty handed, though, because all the runners who participated received free watermelon from the festival! 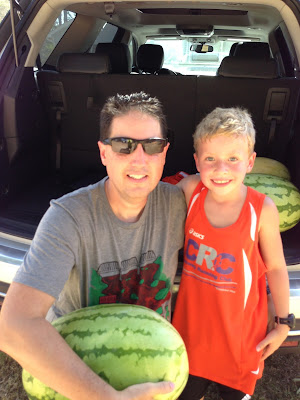 Getting free watermelon is really cool!

What’s not so cool is when the awards/watermelon area seems almost a 1/2 mile away from your vehicle. It was not fun having to not only carry my watermelon, but Braden’s as well…especially after having a draining bad race in the heat! I think the 1K 40 Pound Watermelon Tote was worse than the 5K race as I had to stop several times. Thankfully a parking lot attendant helped me the last 100 yards to get to the other finish line that was my car. I don’t know if the organizers can make adjustments to where they do the awards ceremony, but it sure would’ve been nicer to have been closer to our vehicles. Other than that, the race was well-organized, fun, and the watermelon tasted great!!!


Below is Braden's finish at the 10:00 mark with the coup de grace after he crossed the mats:

With his finish, Braden collected the maximum 20 points for the Grand Prix and has now reached 200 points. The maximum he can get is 250, which hopefully he'll be able to get over the next couple of Grand Prix races.

Our next event will be a Grand Prix non-championship race on Labor Day weekend at the ARK Classic 5K in North Little Rock, where I’m sure hoping the temperatures won’t be 1000 degrees. 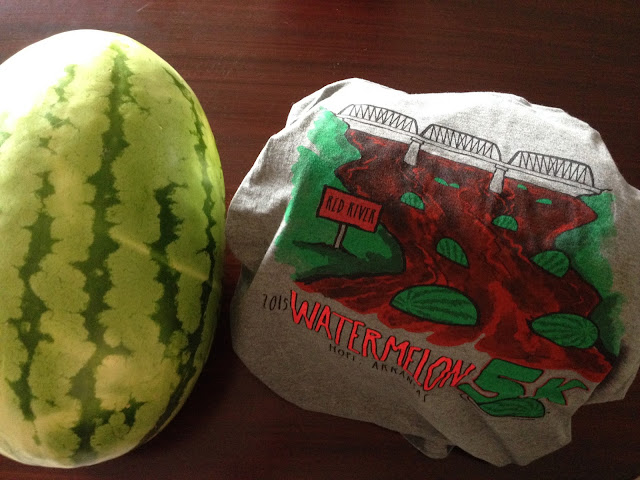 Posted by Running Down a Dream at 5:34 PM No comments: