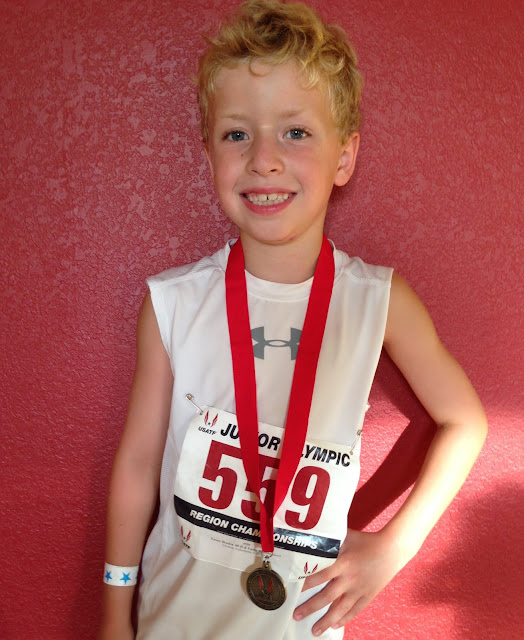 What an exciting weekend it was for Braden as he competed against the best runners from Arkansas, Oklahoma, Kansas, and Missouri at the USATF Region 9 Junior Olympic Championships in Tulsa, OK on July 11! 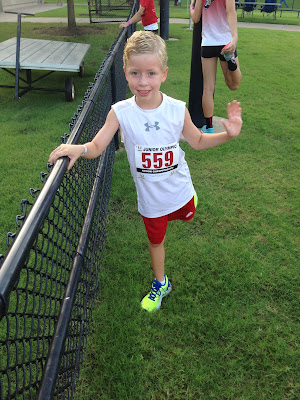 The one advantage he had in Tulsa that he didn't have in Little Rock was the time between in events. He had very short turnaround times between races in Little Rock and you could tell it took a toll on him. For Regionals, though, he had a 9 hour break between his 1500M race, which began at 8 a.m., and his 800M race which started at 5 p.m.

Braden had almost perfect conditions, considering it was July in Oklahoma, for the 1500M race. It was in the mid-70's and winds were around 8 mph. The only instructions I gave to him was to make sure to at least keep the second place kid in front of him. I underestimated him! Braden started out kinda slow, but after the first lap he pulled into second place. From there he fell behind quite a bit from the first place runner, but he in his own right had developed a big gap between himself and the third place runner. At that point I was nervous that he was pushing his pace too fast, but he maintained his advantage through 1200 meters. On the final backstretch the third place kid started to up his pace, but Braden was too far ahead and poured it on the final 100 meters. I honestly could not believe that he  finished second...not only that, but at the time he generated. He came in at a time of 6:31.77 which beat his previous best from Little Rock by 37 seconds and it was far and away the best time he had ever ran for that distance! With that, he received a silver medal and qualified for Nationals in Florida later on this month!! Unfortunately, we made the decision this year to not go to Nationals because of the timing and expense of the trip, but he knows that next year, when he is 8 years old, his times will be even better and we will send him to Nationals where he'll be able to be more competitive. 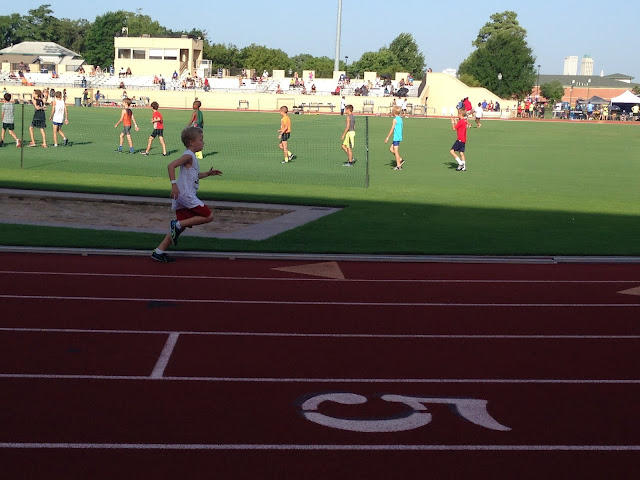 After the 1500, we had a good plan in place that allowed him to relax between the events and not be in the heat all day long. We headed back to the hotel, ate lunch, went to the theater to watch a movie, and then went back to the hotel to take a nap before going back to the track. Braden felt refreshed as he prepared for the 800M event, which was good because the temperature had risen to the low-90's and the winds were close to 12 mph.

Braden had a great start to the race and by the end of the first lap was in fourth place, but on the backstretch on the final lap he was overtaken and was sitting in sixth. On the final curve he battled back to get even with the two that passed him. One of the kids really kicked it into gear to pull ahead by 3 seconds, which left Braden to fight with the other for the 5th place spot. In this Regional, the top 5 finishers qualify for Nationals, so Braden was gunning for the last spot. At the last 25 meters Braden edged slightly ahead, but couldn't maintain the lead and got edged out at the finish line by a 1/2 second. He finished in 6th place, but I couldn't be more proud of a 6th place finish! His time was 3:13.65, which was 26 seconds better than Little Rock, and once again was the best time he had run at that particular distance!


This is when things got interesting and introduced me to the politics of track...in a bad way.

After his race, I went to get him to congratulate him on his new personal best, knowing he didn't qualify for Nationals. On the way, I saw his coach and told him that he came close to getting top 5. At that point he told me that one of the officials had raised a red flag and disqualified one of the runners...who happened to come in 1st place...and who happened to be from Oklahoma...and whose track club was well represented at the meet. At the beginning of an 800M race, all the runners have to stay in their respective lanes until the 100 meter mark, where they then are allowed to converge to the inner lanes. The race officials told the kids that at  the point of the orange cones, that is where they could move over. Apparently, though, the first place finisher started to converge about six yards before the cones and was the reason why the red flag was raised. I know that if it were my kid, I would be sickened by the thought of coming in first and getting disqualified, but in the same respect rules are rules and even though Braden wasn't going to go to Nationals, he would have won a medal and still had the distinction of qualifying.

30 minutes after the completion of the race, I went to go get Braden's medal and was told that he didn't get one because he finished in 6th. I told the lady that the first place finisher had been disqualified, but she said it wasn't reflecting on the official results. At that point I told the coach what was going on and him and I went to track down the race officials to find out was going on. It took over an HOUR for these officials from Oklahoma to confer with the other coach, amongst themselves, and then the guy who raised the red flag. They finally got back to our coach and gave a lame excuse that in the flag guy's judgement he thought it was a different kid who made the violation. I then challenged her by saying if that were the case, SOMEONE would have been disqualified and from the results, yet no one was. She then came back with some other lame excuses and the coach basically called her on the carpet and accused them of protecting one of their Oklahoma runners and that they were creating a cheating environment. I was then told I could protest the decision, but I'd have to pony up $100 and because it was a judgement call from the flag official, we would basically lose. From there, the coach told them that he expected more from a USATF Regional event and that what they were doing was crooked, but unfortunately there was nothing we could do. 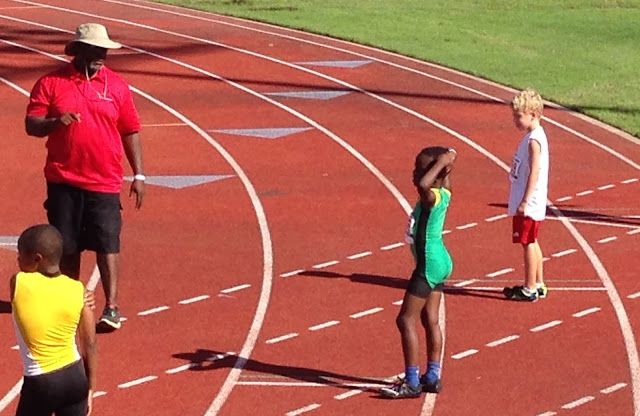 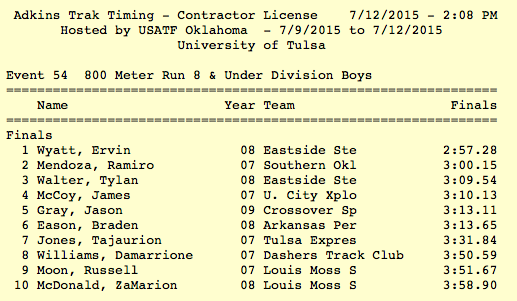 As we were leaving the stadium, I had to tell Braden that once again he was in 6th and wasn't going to get a medal. Credit to him for not throwing a fit or crying about it, but I could tell he was disappointed. The coach then took him aside and told him that he was his star athlete for the meet and couldn't wait till next year when Braden would be another year older and in the same age group because he thinks that he'll be competing for 1st place finishes, especially if he keeps working on his speed. After saying these kind words, he told Braden to wait as he went to the back of his vehicle to search for something. When he came out, he gave Braden a medal and told him that he deserved another one after the exceptional meet that he had. What a class act!!!


Even though the outdoor track and field part of the Junior Olympics is over for Braden this year, he will now start training for the Junior Olympic Cross Country National Championships that will be held at Albuquerque, NM in December. We told Braden that once he qualifies in November here in Arkansas, we would take him to Albuquerque to run with more than 200 other runners in his age group. Until then, he will be running a few more 5 and 10K Grand Prix events. He is going to miss his first Grand Prix race (the White River 4 Miler) since March because he will be vacationing in Minnesota with his grandparents, but will be back for the Watermelon 5K at Hope, AR on August 8. 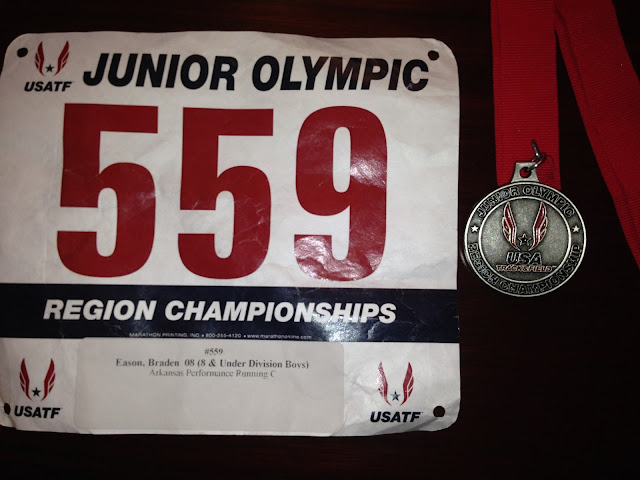