The Fly Like an Eagle 5K was a perfect example that despite the fact Braden wants to get a PR in every race, sometimes there is going to be some adversity and a PR is just not going to be in the cards.

Adversity in the form of illness and injury hit Braden and myself over the past couple of weeks. I sustained an Achilles injury from the Capital City Classic 10K and have been put under orders not to run for a while until it heals up (which is VERY hard for me to do!) and then a couple of days after Braden's birthday, he came down with strep throat and was out of commission until a few days before the race.

After the 10K race, I had a conversation with Cindy Stage, fellow Conway Running Club member and supporter of the Vilonia cross country team (to whom the Fly Like an Eagle race benefitted), concerning the 5K race and my injury, since normally I run with Braden to pace him. She mentioned that possibly she could get a cross country team member to run with Braden...which got my wheels turning. Braden LOVES watching track and is a big fan of the Vilonia track team and in particular Zach Rail. Zach Rail is the two-time state champion in cross country and holds almost every distance record for Vilonia High School. The Vilonia team, year in and year out,  is one of the strongest programs in the state and Braden aspires to be a part of the team many years from now. I called Cindy back the next day and asked her if she could pull some strings and have Zach run with Braden during the race, since I couldn't, so she said she would see she could do. When I told Braden of the possibility of running with Zach, he was on cloud nine!!

Then Braden got sick...

It was dicey on whether to run the race or not; and on top of that, when you have a kid who would have to be on death's door to not run a race, it makes it a tough judgement call on when to have him run again. Luckily (if you can call it that) his sickness had subsided three days before the race, so I took him out to the track two days prior to see how he would do. He ran at a slower pace, but he didn't have any issues whatsoever, so he said he was ready to go for the race...he wasn't about to let the opportunity of running with Zach slip by.

On race day, upon our arrival, Cindy and the cross country coach, John Allison, introduced us to Zach and some of the other cross country team members. The team members talked with and spent a lot of time with Braden prior to the race.

Braden wanted to PR the race, since it was a flat course and his previous best time of 26:35 was set a month earlier on a hillier course...but it wasn't meant to be. This was the first race of Braden's that I was purely a spectator and after checking my watch at the half-way point and not seeing him come into view in a timely manner, I figured something might be wrong. When he did finally come into view, he had to stop at the water table (which is something he's never done in a 5K race) and it looked like he wasn't his normal speedy self. 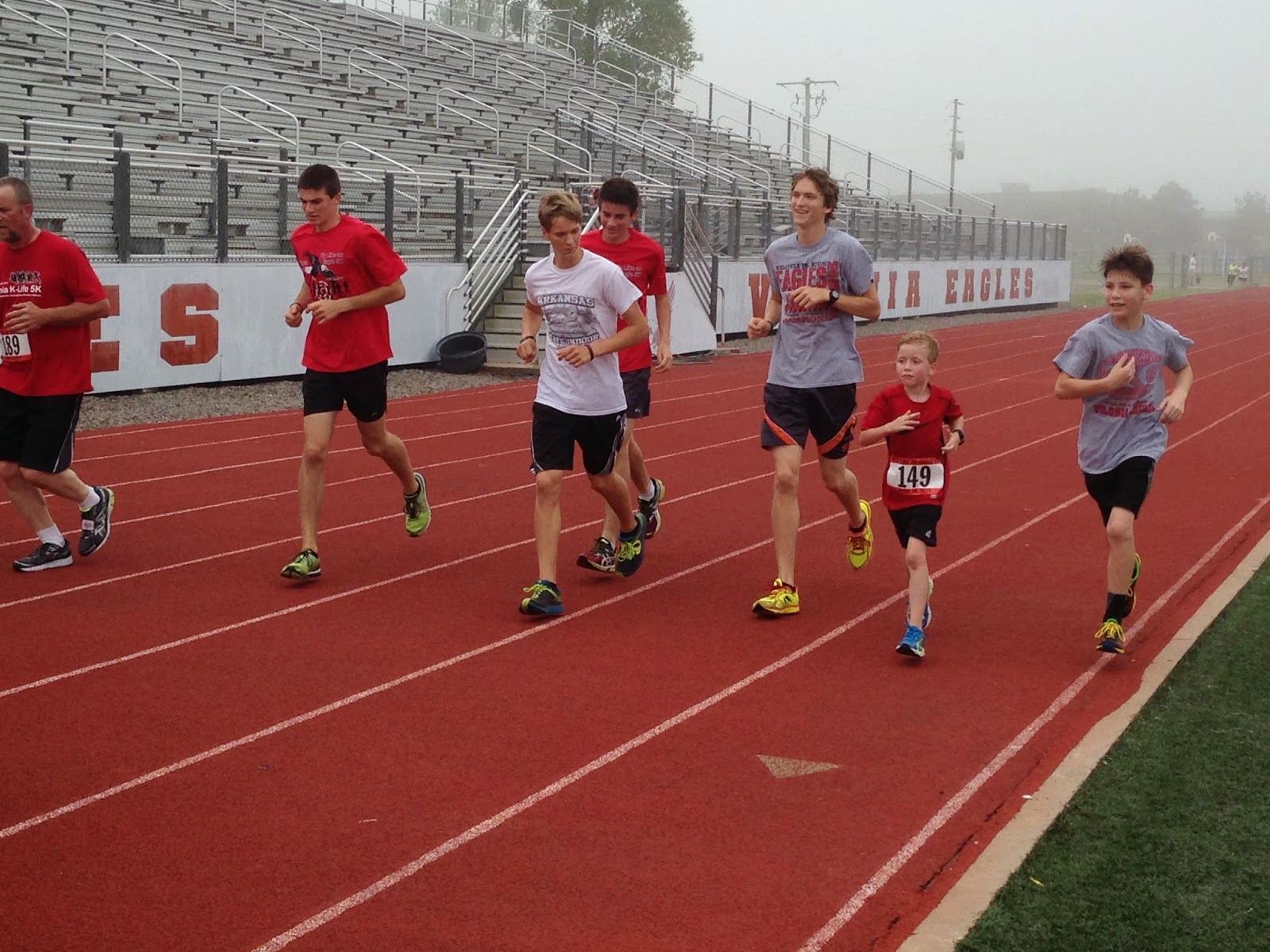 Towards the tail end of the race as they entered the stadium for the last 1/4 mile he was already passed the 30 minute mark and he was really struggling. With 200 meters left he had to stop and proceeded to throw up. After losing his banana breakfast on the track, he refused to quit and ran full tilt to the finish line with a time of 32:03...5 1/2 minutes off his PR, but still good enough for first place in his age group of one.

Zach and the rest of the team were a constant encouragement to Braden during the run and even though Braden was disappointed with his time, he was thrilled to be with his new friends. Even after the race, they played frisbee with Braden and hung out with him through the awards ceremony. From the coaches to the runners, the cross country team were all very gracious and I'm so looking forward to the day when Braden runs for the Vilonia program!

Braden's next race will be on May 4 at the Toad Suck Daze 10K, a championship Grand Prix  race. 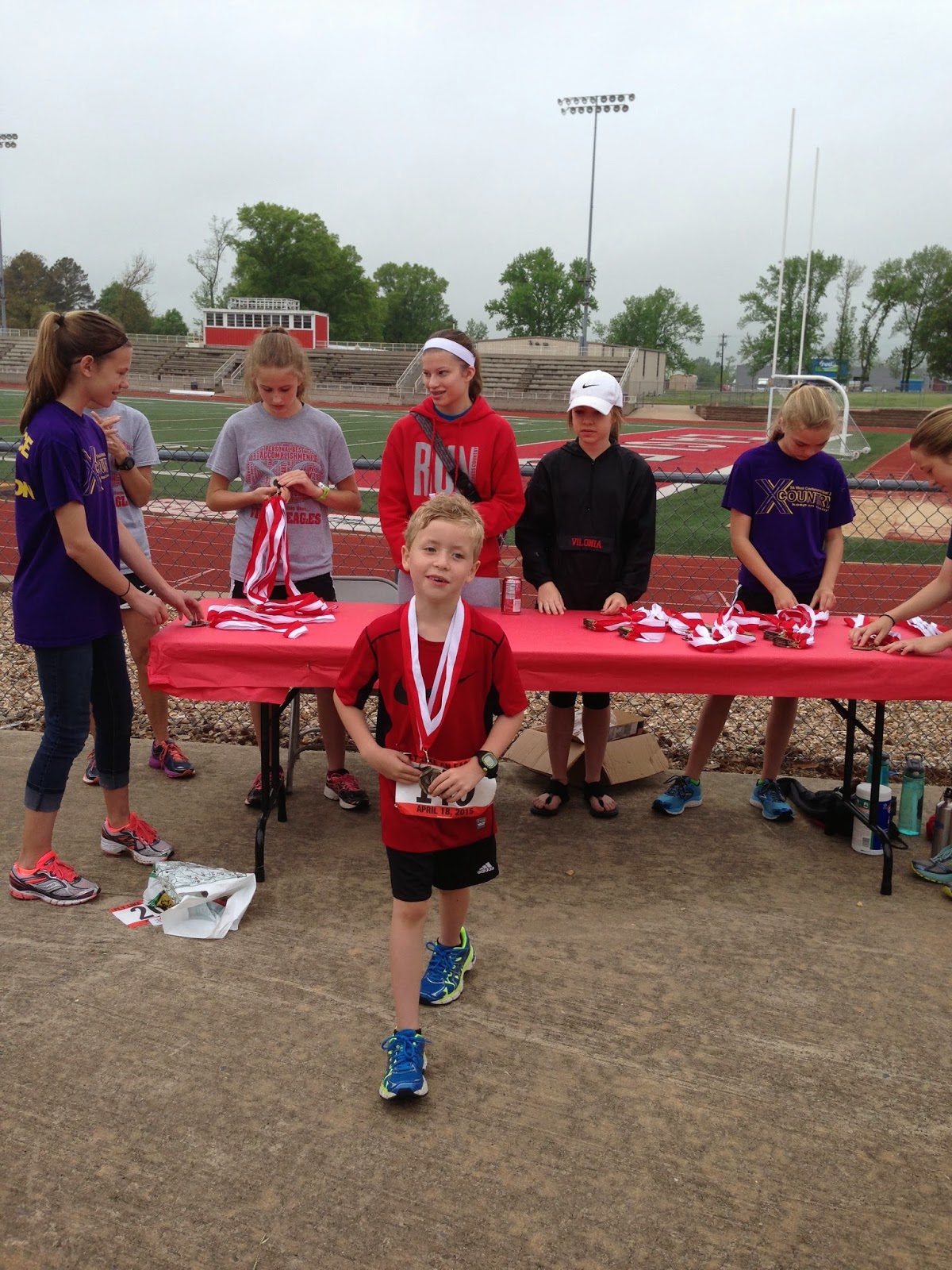 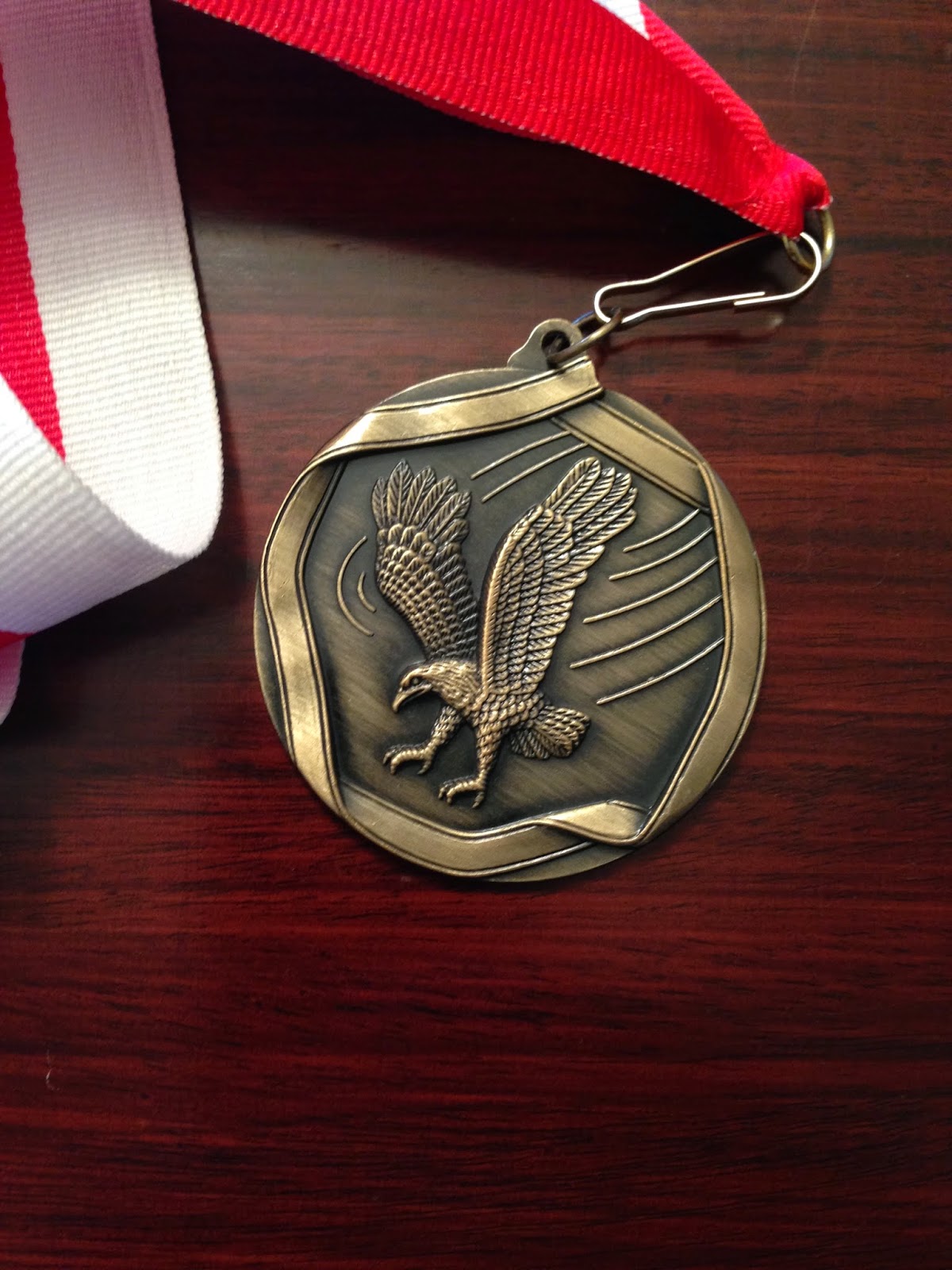 Posted by Running Down a Dream at 1:43 PM