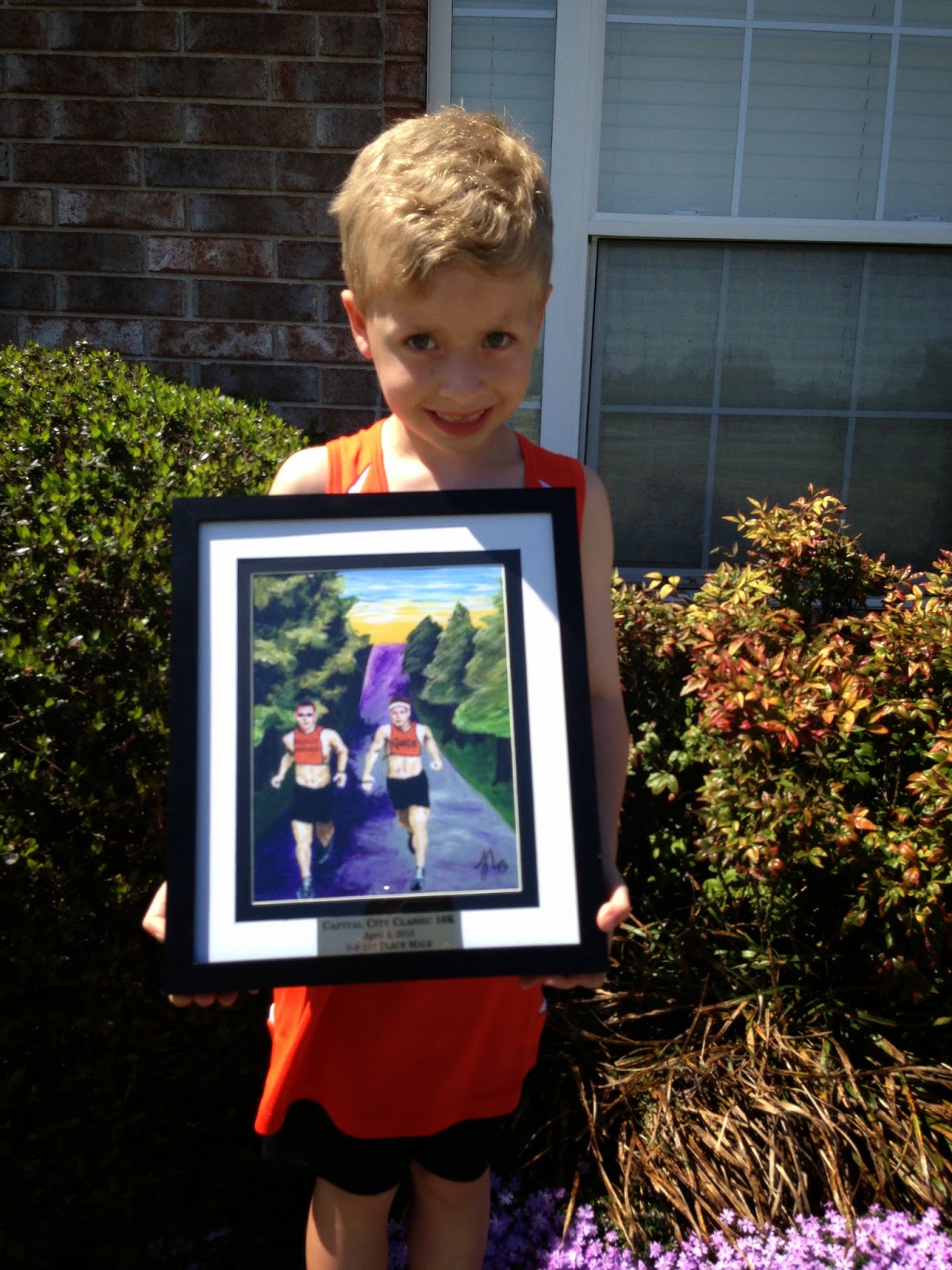 Welcome to the latest posting of Running Down a Dream...the Capital City Classic 10K edition and Braden's last race as a 6-year-old since he'll be turning 7 on April 9th! 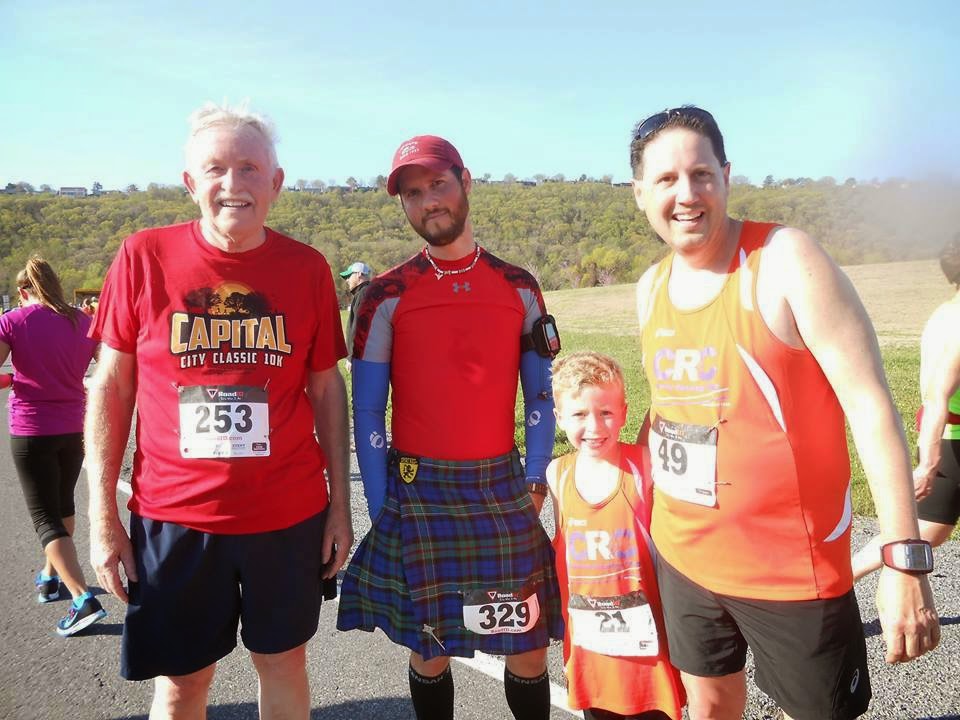 Going into the Capital City Classic, I had a lot of concerns on how to handle this race with Braden. It had been a couple of weeks since our last race, his last 10K training run was so-so, and weather had been pretty crummy as of late. What was helpful was that I knew the course was flat, the weather forecast was looking good, and Braden had a very strong 5K training run two nights prior. With that in mind, I told him we were going to shoot for a 9 minute per mile pace and hopefully finish underneath the 56 minute mark; which would be a PR by a couple of minutes set at the JLLR Downtown Dash three weeks earlier with a 9:20 pace. What was cool about this race was that it was the first time that me, Braden, my brother Greg, and my father-in-law Bernie all ran in the same race. 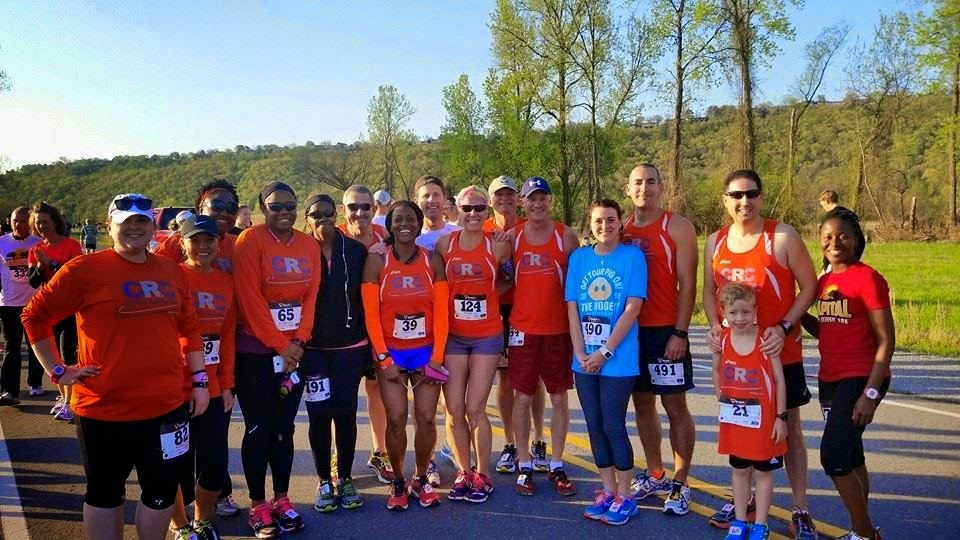 We eased up closer than normal to the start line prior to the race because it was a gun start, so I knew we were going to lose some time coming out of the gate. Once we got past the initial mass of humanity, we settled in at about an 8:45 pace. I told him we were going to slow it down a little bit, but he said he was feeling good, so I locked us in on an 8:53 pace instead of 9:00.
The run was going beautiful and the first half of the race felt like we were going slightly up on elevation and we were going against just a little wind. I kept telling him that the second half of the race should be better because we'd have the wind to our back and a slight decline in elevation to help us finish strong. Unfortunately, for me, at the half way point it felt like something had popped in my right leg around the Achilles area. My main concern was that I would make it worse if I ran further and that I would hold Braden back if I couldn't maintain the pace. I fought through the gritting discomfort and discussed with Braden to see if he wanted to pick up the pace a little more over the last couple of miles. 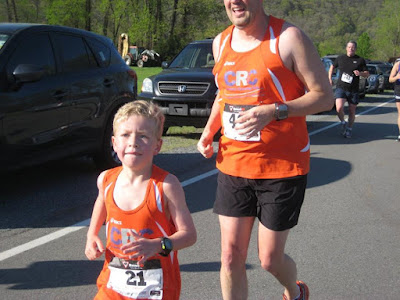 Based on the Garmin, we ran the 5th mile at 8:47 pace and then ran the 6th mile at an 8:41 pace. He then had enough left in the tank to make a finishing kick the last 100 meters to finish with a PR time of 55:08. Officially, he finished with a pace of 8:54, factoring in the gun start and the obvious more distance traveled, while unofficially, by the Garmin, he finished with an 8:48 pace. Braden basically knocked off three minutes from previous PR and I was so amazed on how effortless he looked running the race!

When I raced next to Braden I noticed how good his form looked and how well his breathing control was. He got several compliments during the race from other runners on his running abilities and I know that these types of comments just motivate him even more.

Braden finished in first place in his age group of two, but most importantly, since this was a non-championship Grand Prix race, he picked up the maximum of 20 points in the standings. He now sits one point behind the current leader and unless something bizarre happens, he'll be in first place after the next championship Grand Prix race, which is the Toad Suck Daze 10K on May 4th. 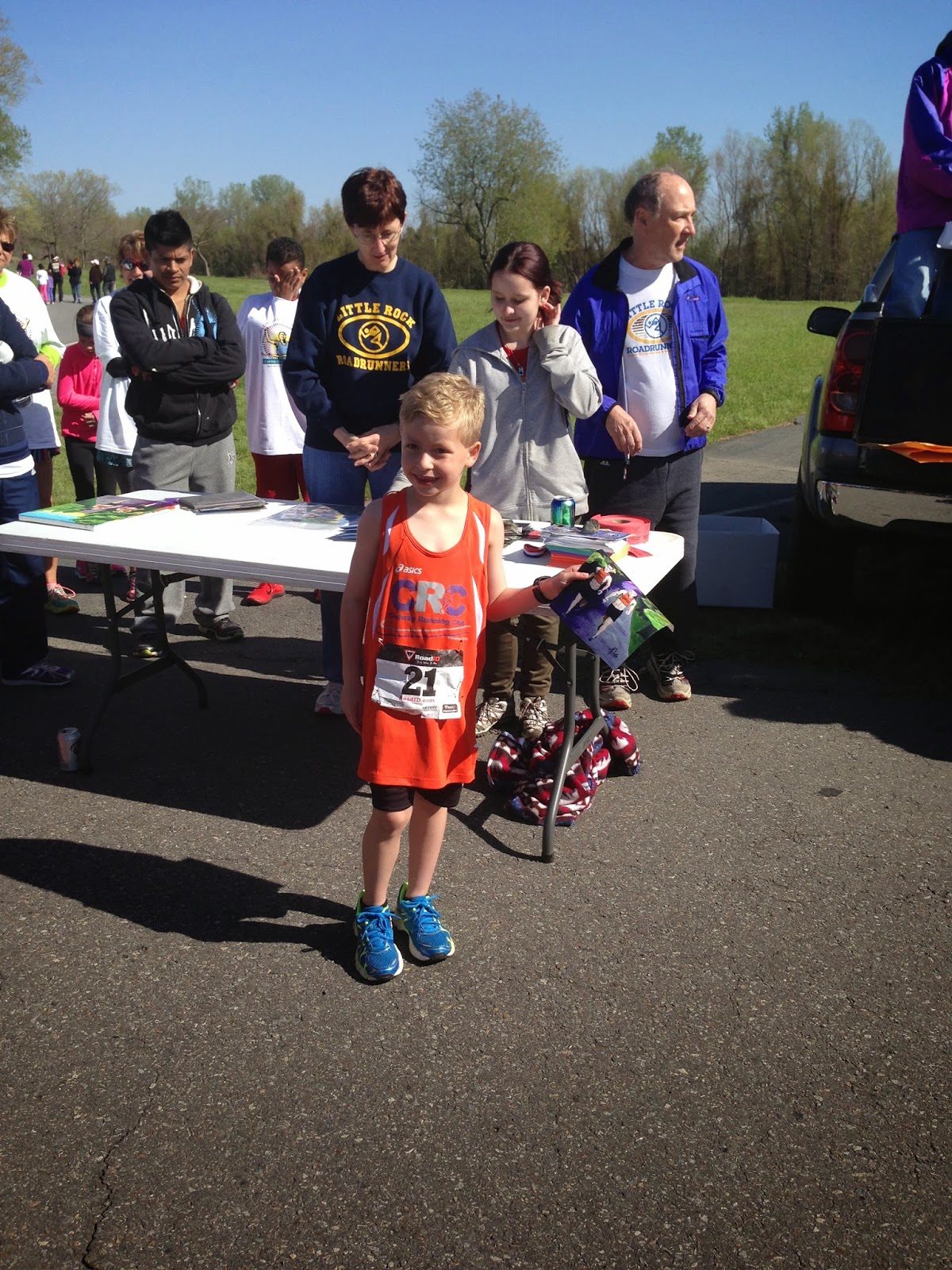 At the awards ceremony, Braden received a print of a well-known local runner who passed away recently...Jacob Wells, who was very active in the running community and assisted physically challenged runners as well. It's pretty cool to get other things than just a medal or plaque...so after the race we went to get a frame and now it sits proudly on his desk. 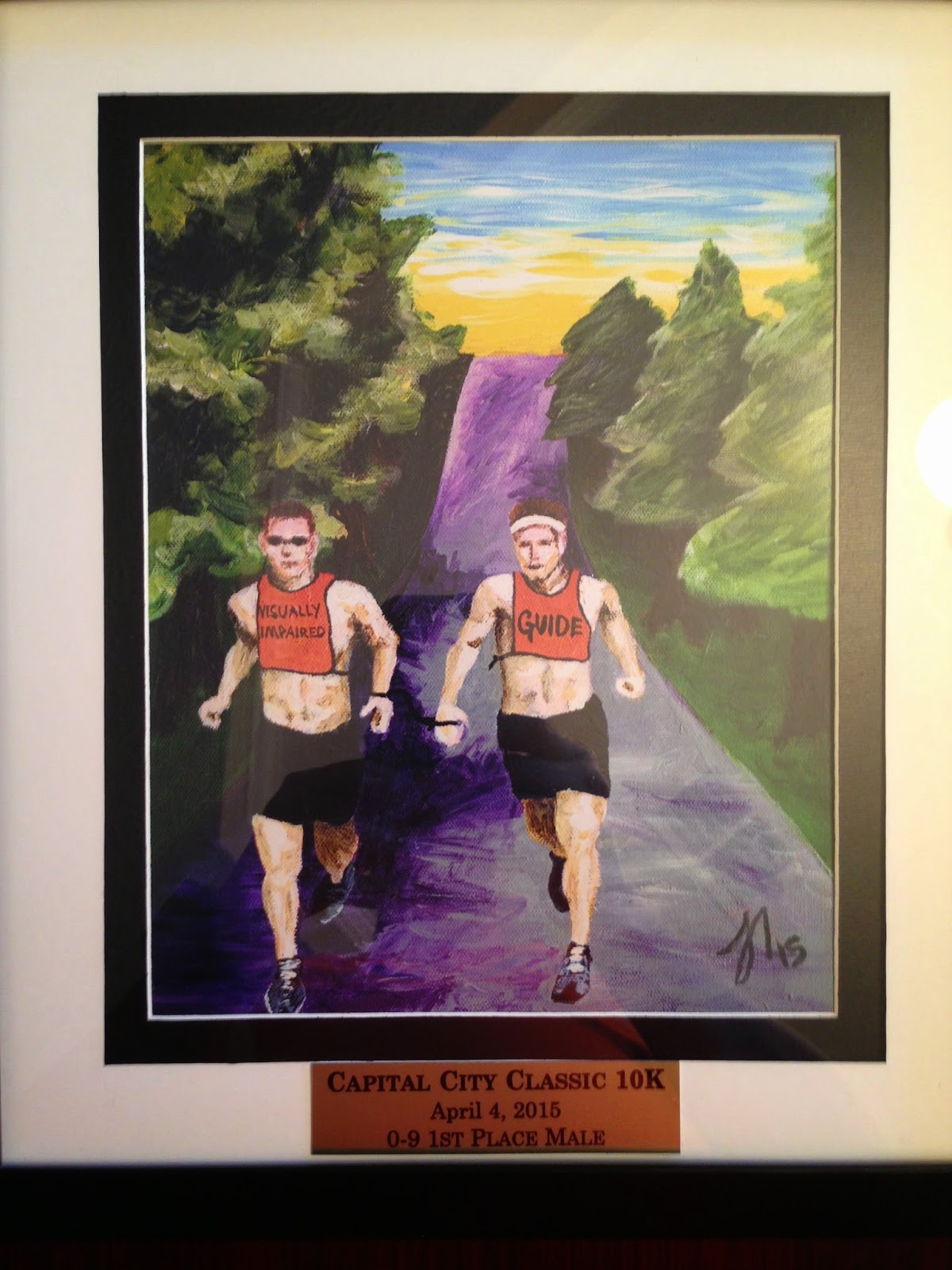 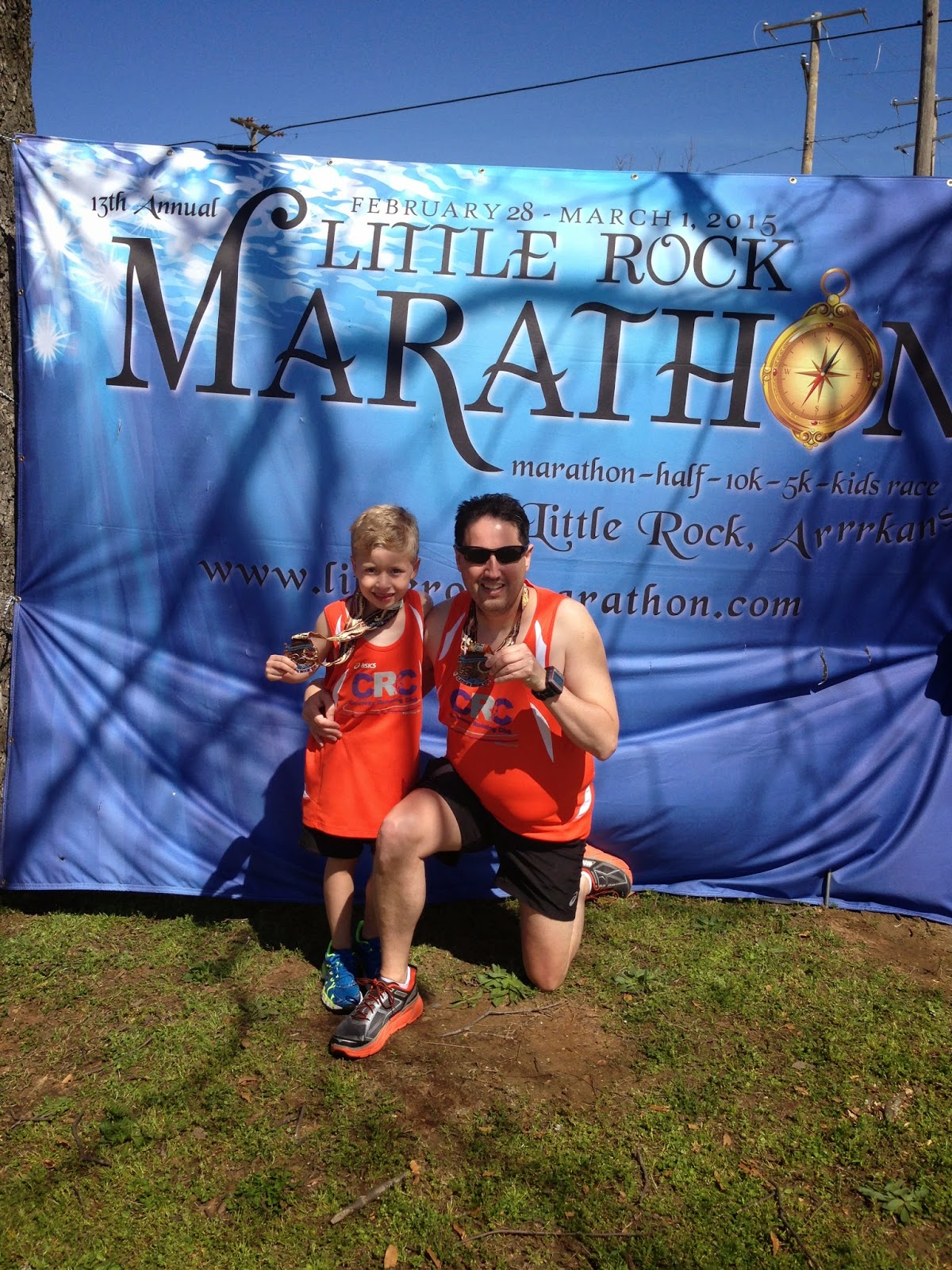 After the events at the race, we had more business to take care of because the distance medals from the Little Rock Marathon were finally available for pick-up! Even though Braden didn't get the 3.5 pound monster medal from the marathon (he now wants to run the marathon next year...I told him no!), he thought his 10K medal was spectacular. 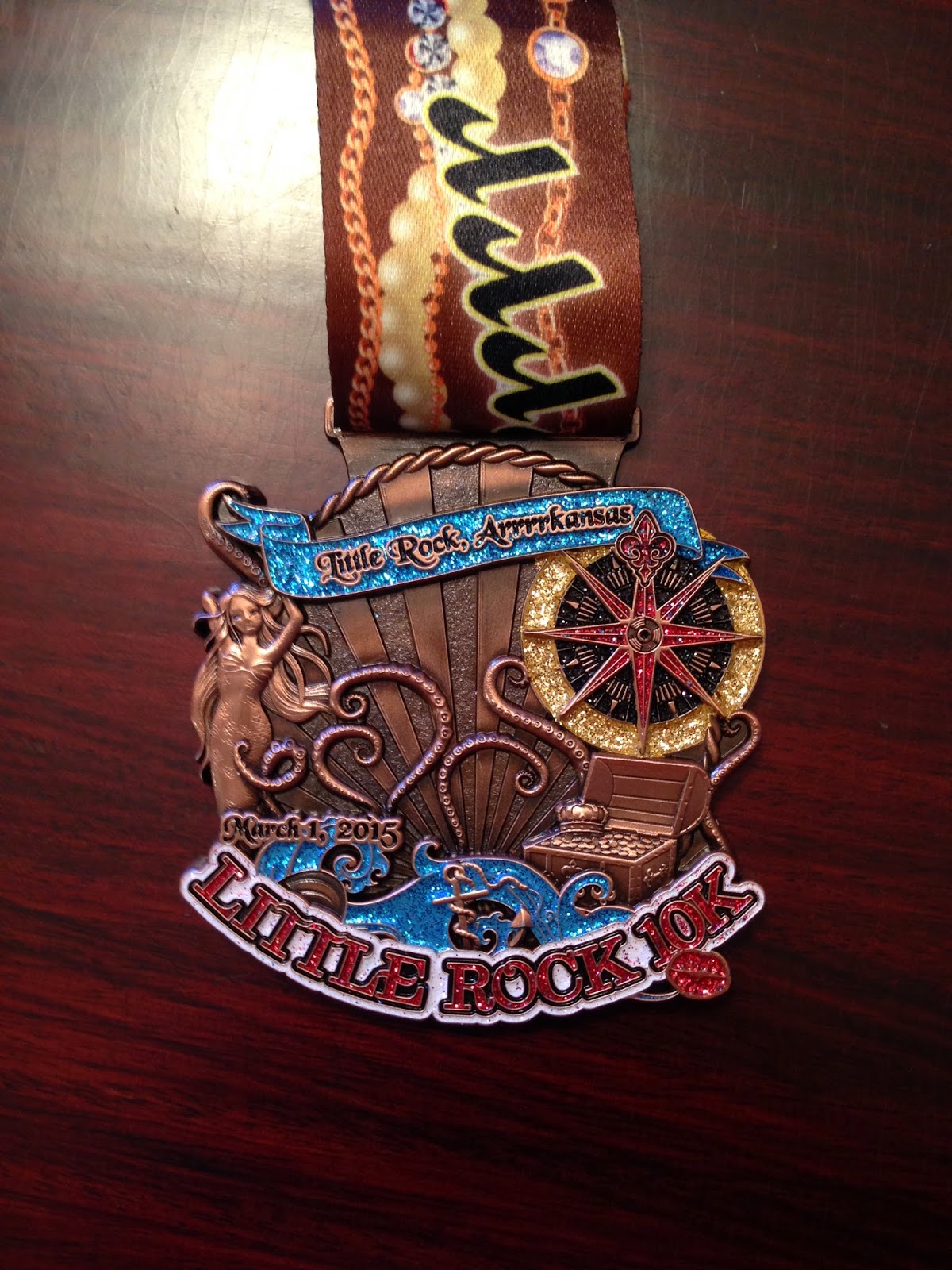 Our next race is two weeks away at the Fly Like an Eagle 5K in Vilonia and Braden is looking to set another PR. The proceeds of the race are used to support the Vilonia Cross Country team (where Braden hopes to be a future team member).
Posted by Running Down a Dream at 7:26 AM