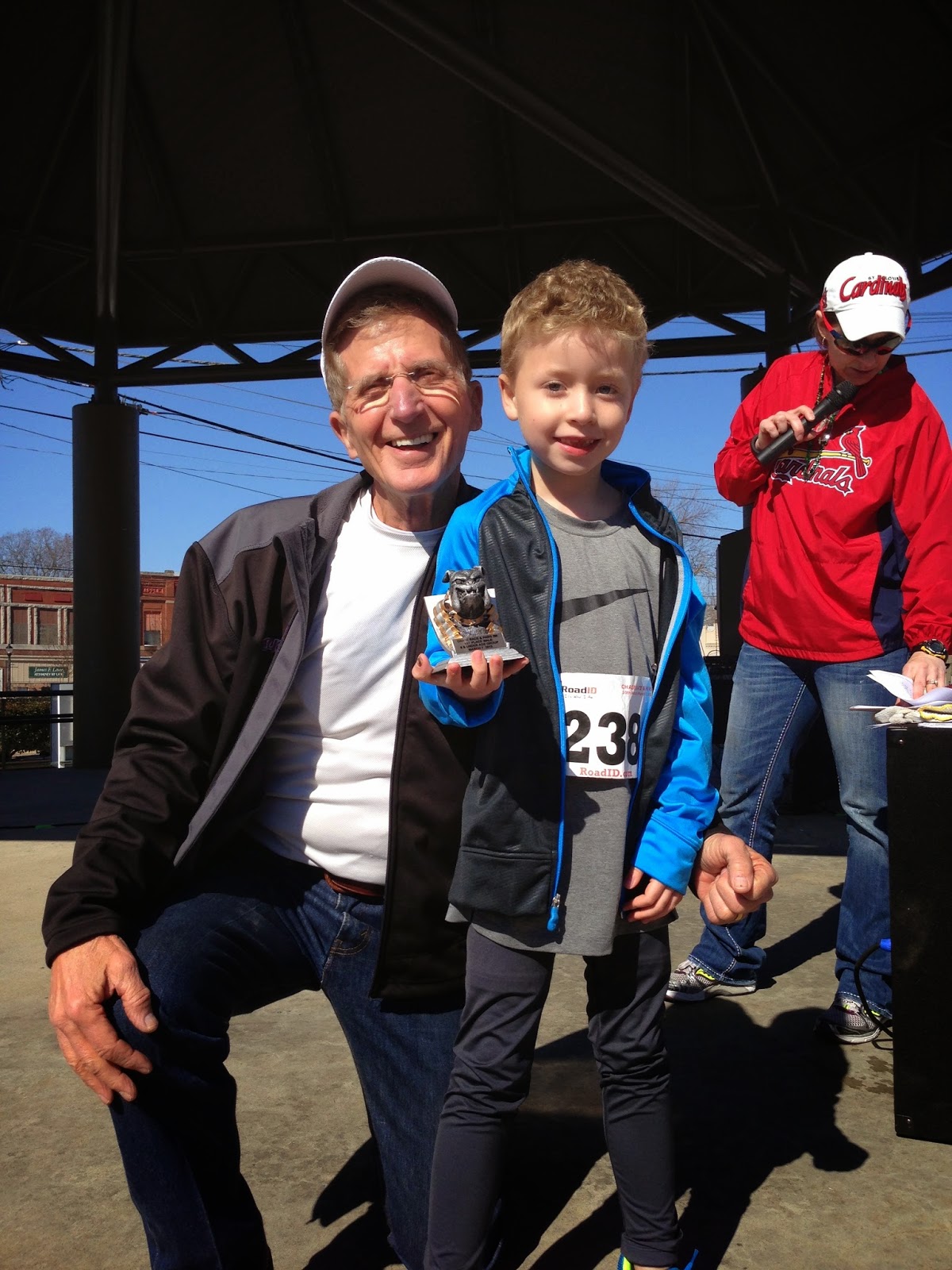 Since I'm already in catch-up mode with the blog and Braden's races, I'm going to go back through the past three weeks races, starting with the Chase Race 2 Mile race that took place in Conway, AR on March 7, 2015.

Going into the race, I noticed that the normal age group breakdown (which is usually 0-9 years) for his bracket was broken down into 0-6 then 7-10 age groups. Because of his training runs, I figured he had a real good shot of winning his age group. The unique thing about this race, though, was that they actually had course records for each age group, with a time of 19:03 being set in 2010 for his particular age group. Our last training run before the race was an 18:38 on an indoor track a week before the race, so I felt pretty confident that he could break the record if the weather conditions were good.

The weather on the day of the race, though chilly, was wind-free and the course was a flat one. Through our first mile we were on about an 8:45 pace and Braden said it felt we were going too slow, so I picked up the pace for the last mile.

The great thing I notice about Braden is that he has a very strong finishing kick and after we crossed the finish line I couldn't believe what he accomplished. He finished with a time of 17:12 (8:36 pace), which set a new course record for his age group by 1:51! Little did we know, it was going to be his first PR (personal record) of three over a three weekend race period.

Not only did he win first in his age group, but since it was an Arkansas Grand Prix championship race, he collected 30 points and was in second overall in the standings (due to missing a couple races at the start of the season because of not being signed up). He also won a free entry into next year's Chase Race because of setting a course record and he also won a $110 gift certificate to the Sporty Runner. Overall, I think he had an awesome day! 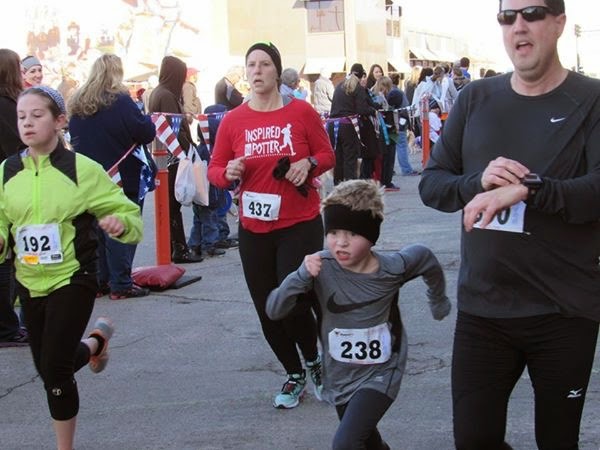 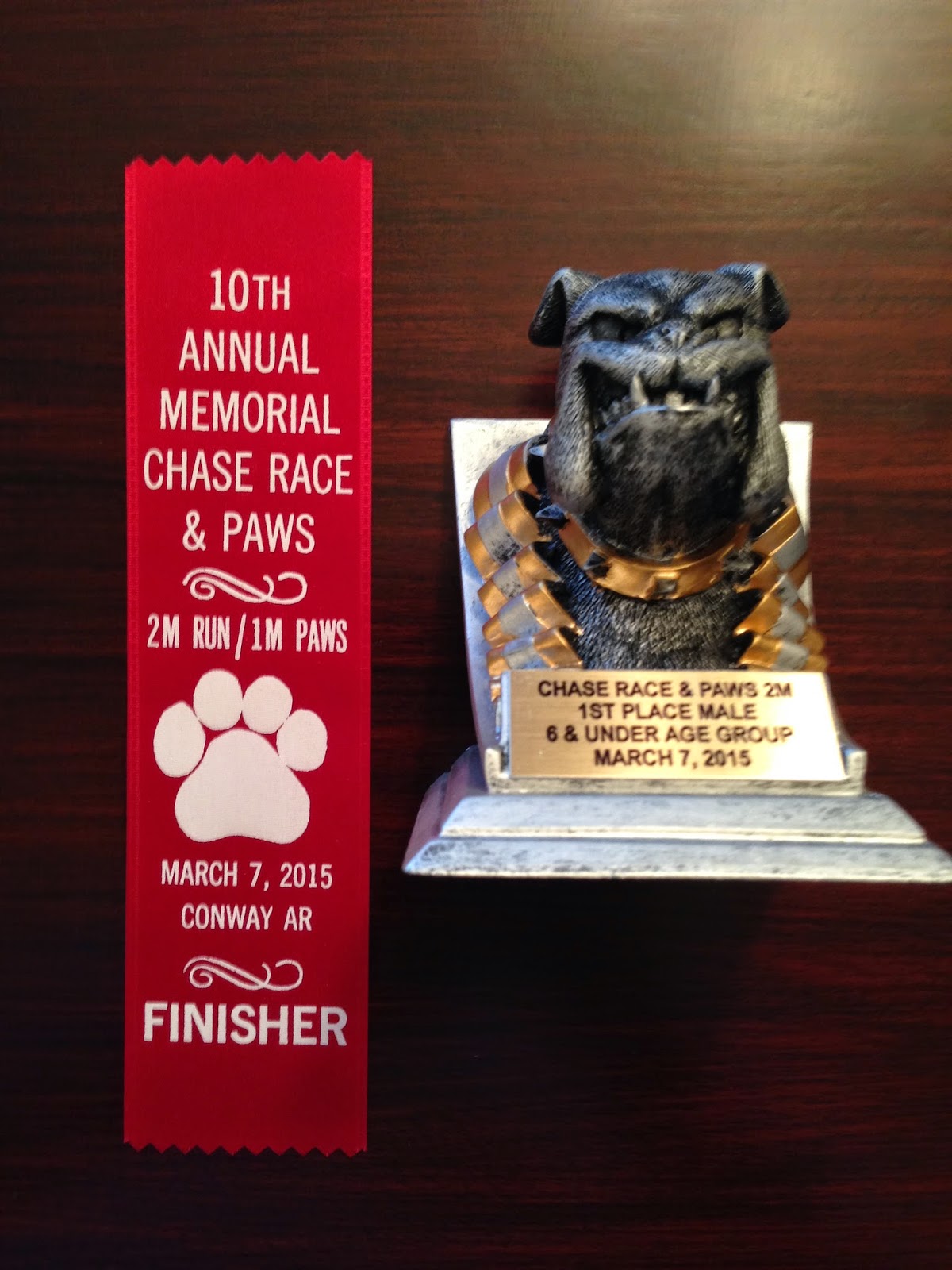 Below is the video of Braden and me finishing at the 7:13 mark in the video, where he didn't have the most graceful of finishes...stupid mats!