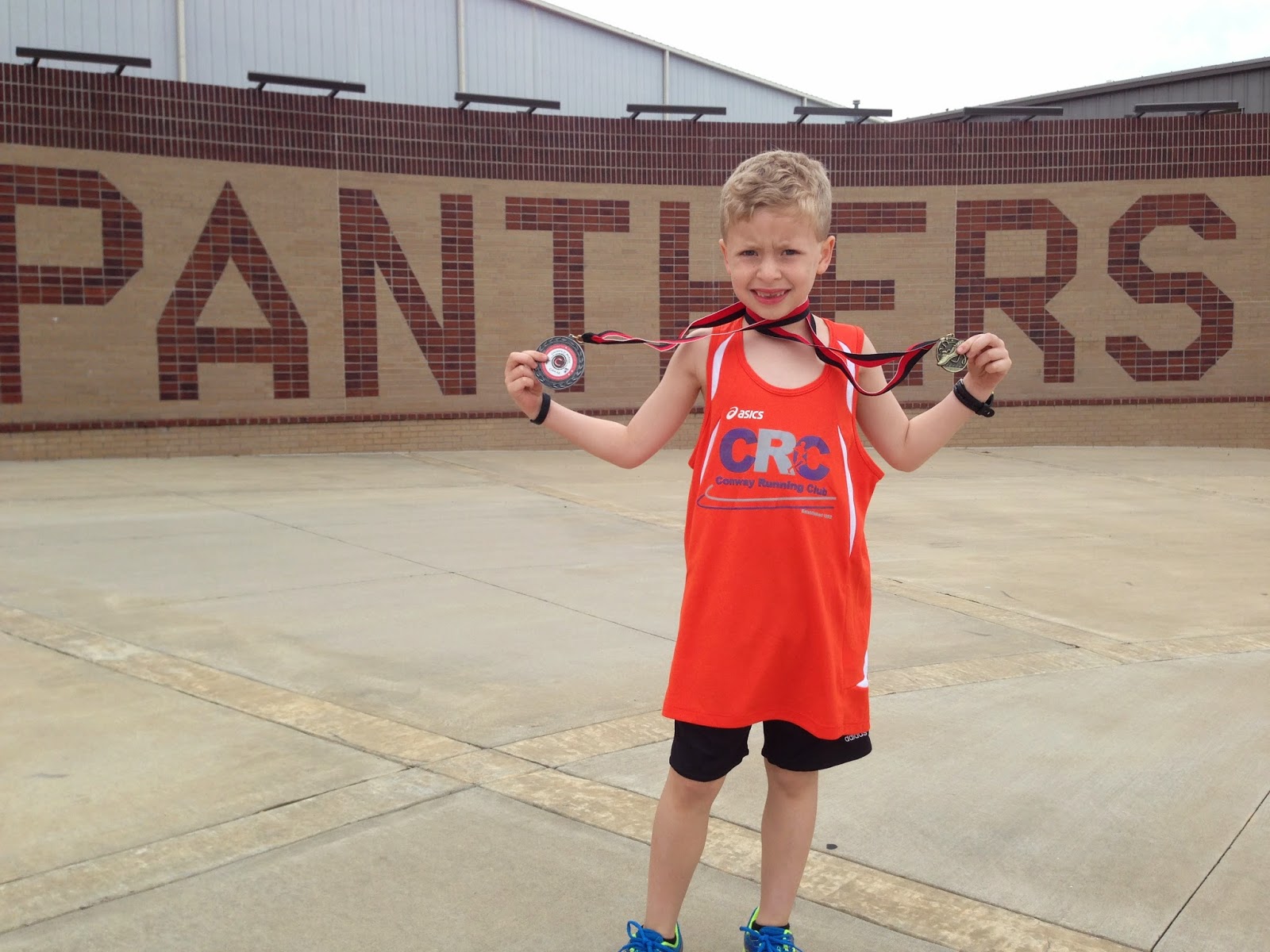 Braden's most recent race was last weekend at the Spring Fling 5K in Cabot, AR on March 21, 2015.

Since this was a Grand Prix championship race, Braden wanted to do really well, and he was especially excited because it was the first time he got to race in his Conway Running Club orange colors!

Three days prior to the race we had a training run on the indoor track and did a 5K run in 27 minutes, which was by far his best 5K ever, but we knew that the Spring Fling course was a little hilly and you never know about mother nature.

On the day of the race, Braden got up really early due to pre-race anxiety, saying "All I can think about is this race and I can't get any sleep!"  It was a tad chilly prior to the start, but otherwise perfect running conditions with zero wind. As far as 5K races go in the Grand Prix, this is one of the more competitive ones because past history showed that a lot of nine-year-olds who don't participate in the Grand Prix run it and win the age group. With that said, Braden knew that he had a little bit of a challenge ahead if he wanted to win his age group, but most importantly he wanted to get all 30 points to catch up in the Grand Prix standings.

It's funny watching Braden prior to a race because he gets his adrenaline going and is so ready to race, but he is really focused as well. It was awesome seeing the CRC members wish Braden good luck along with some of the other Grand Prix runners prior to the start of the race. We got off to a great start because we started a little closer to the front and set out to run about an 8:20 pace, just to see how he would handle it. About 1.5 miles in, he had to tell me to slow down the pace because it was a little too fast, but we still went at a pace that would break us under 27 minutes. He tackled one last hill at about the 2.5 mile mark and he was getting a little spent, but he knew that the finish was coming up, so he went at it strong. At the end of the race he tried to utilize his strong finishing kick, but he didn't have as strong as one as he liked because of the prior hill.

It didn't matter about his finish, because he still came in with a time of 26:35 (8:34 pace), which shaved 3:31 off his previous 5K mark set six months earlier! What was incredible was that he ran at a faster pace than the 2 mile race from two weeks earlier and on a hillier course! What made Braden (and myself) even happier was that he finished first in his age group and he collected 30 points for the Grand Prix standings! Now Braden still sits in second place in the standings, but by looking at the upcoming races in the Grand Prix (which are both 10Ks), he'll have a real good chance of being in first place by the beginning of May.

It is great being a part of the CRC group (they are really a wonderful group of runners) and Braden got a big kick out of the support and fist bumps!

Our next race is next week at the Capital City Classic 10K in Little Rock, so we get a break for the first time in a month, but he's been training really well and hopes to set a new PR on the flat course. It is a Grand Prix non-championship race, which means it's worth only 20 points for a first place finish in the standings. 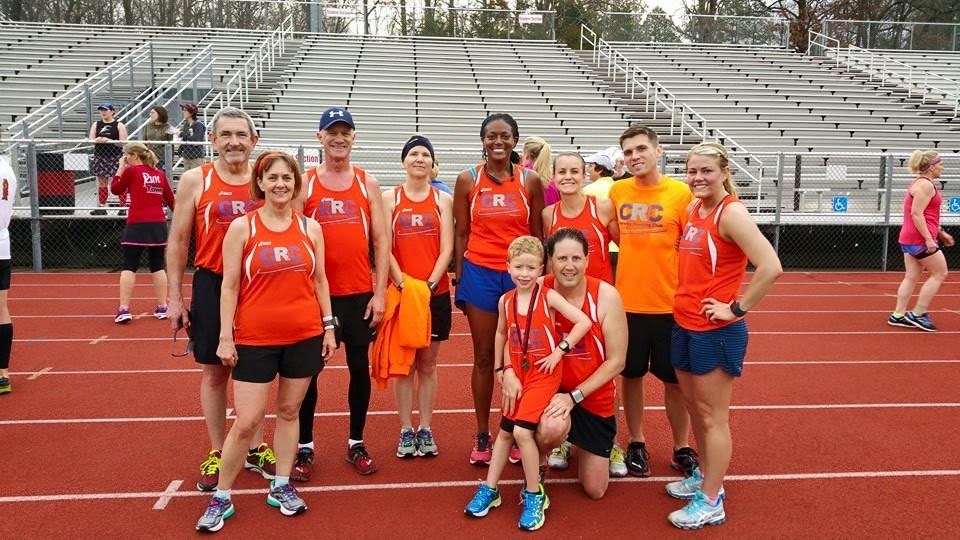 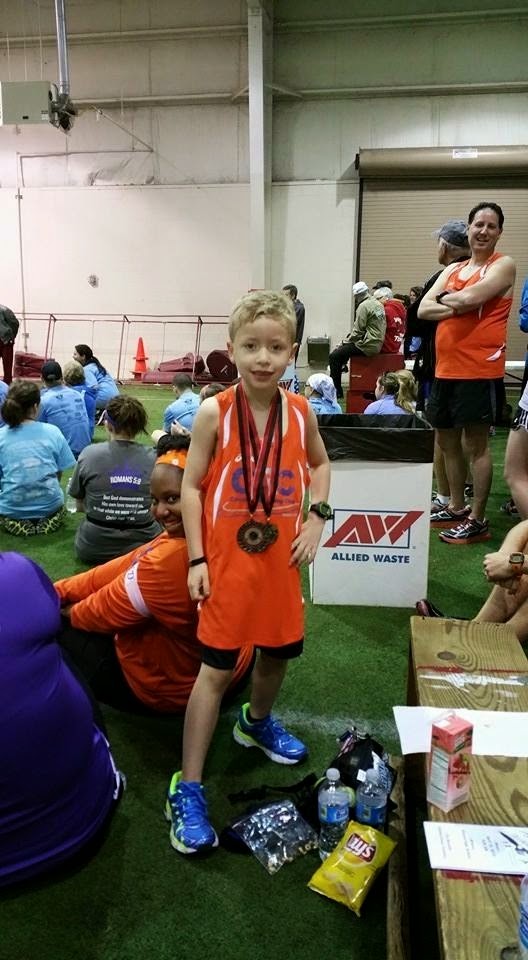 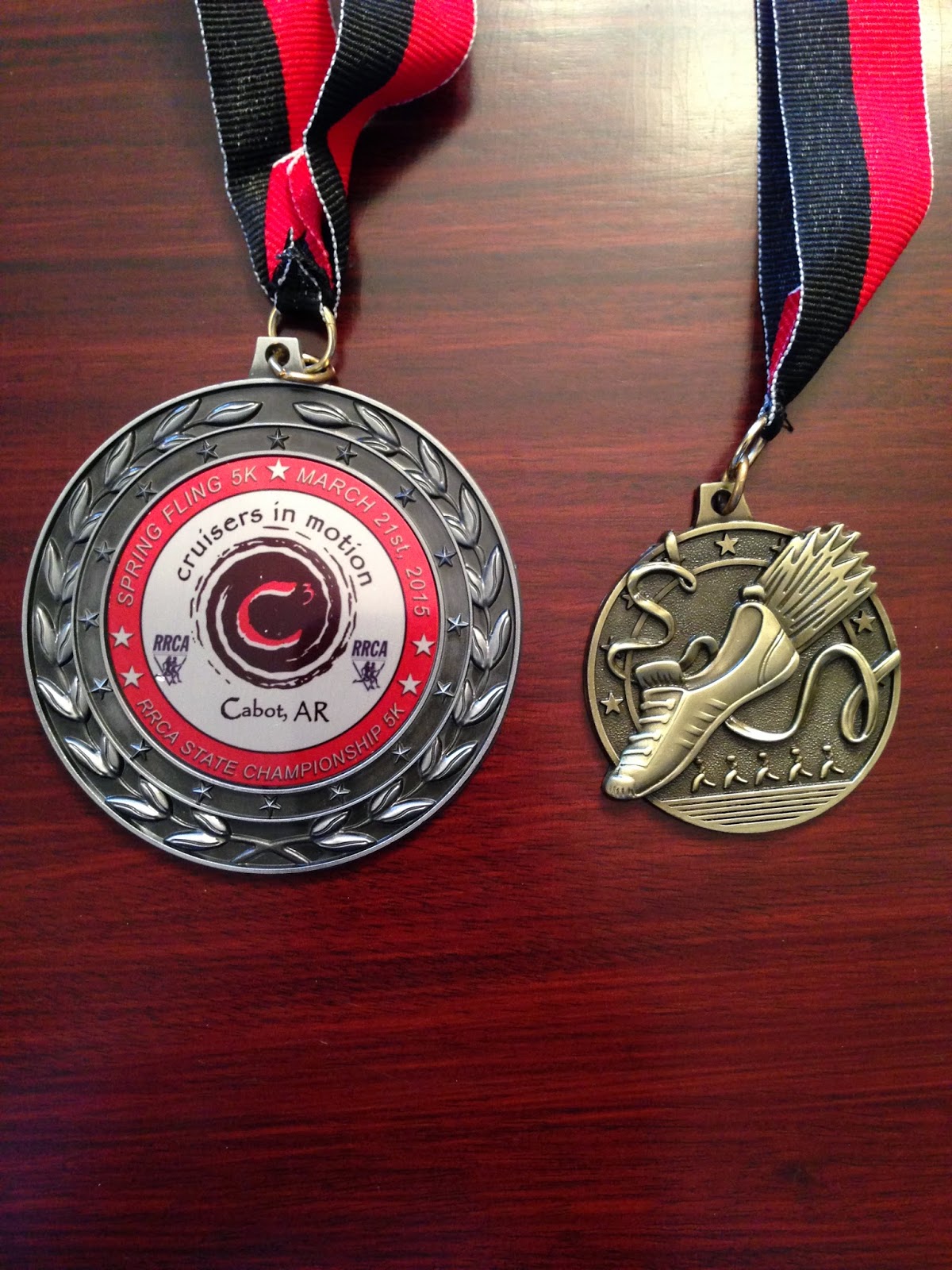 Below is the video of our finish at the 8:30 mark: